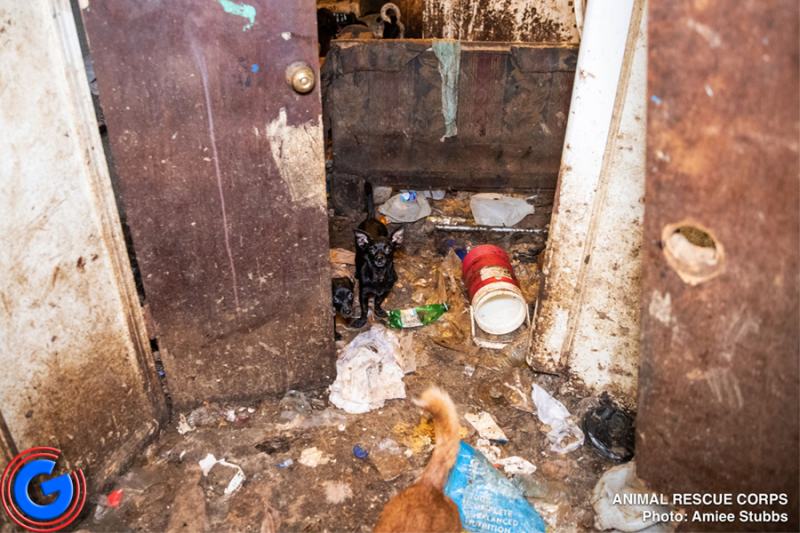 Click above PHOTO to see more pictures from the June 2021 Rescue.

ADVERTISEMENT
Authorities were performing a welfare check on a property owner with a history of animal neglect when upon inspection, they found clear violations of state and local safety and animal cruelty codes. Small dogs including puppies and newborn litters were visible loose inside the house with a floor piled thick with animal feces, strewn with debris, and soaked in urine. At least three dead dogs were found in the house. The stench and dangerously high levels of ammonia gas from the animal waste was detectable from outside the home. The property owner was arrested and taken to jail for booking. Authorities reached out to Animal Rescue Corps, a national animal protection nonprofit that specializes in large-scale animal cruelty cases, and ARC’s team deployed to help these animals and the community of Jackson.

“The conditions on this property are some of the worst we’ve seen.  It’s absolutely horrible.” Said Amy Haverstick, ARC’s Director of Operations, “These poor animals have endured extreme suffering.”

Many of the dogs exhibited signs of severe, chronic neglect, including emaciation, starvation, mange, dehydration, intestinal worms, external parasites, runny eyes, and alopecia. None of the dogs had access to food or water.

"We have a wonderful and dedicated staff but this case was beyond our logistical means and the success of this operation wouldn't have been possible without ARC, '' said Whitney Owens of the Jackson Department of Animal Control.


ARC documented all of the animals on the property and transported the dogs to ARC’s Rescue Operation Center in Lebanon, TN, about 40 minutes east of Nashville. Each animal will receive a thorough veterinary exam, appropriate vaccinations, and any necessary medical treatment. All of the animals have been surrendered to Animal Rescue Corps. ARC will provide daily care until they match and transport the dogs to vetted shelter and rescue organizations that will ultimately adopt them into loving homes. For people wishing to foster or adopt, ARC will publish its list of shelter and rescue placement partners on its Facebook page once the dogs are transferred to these groups.