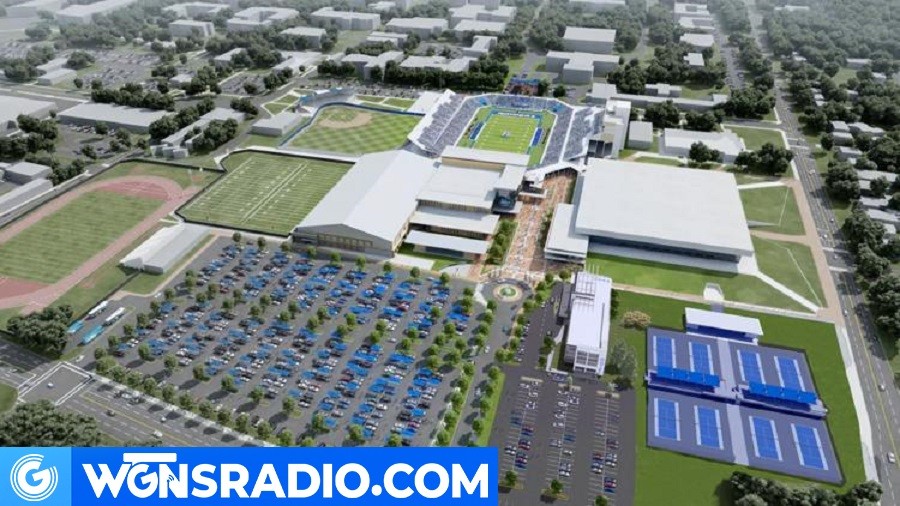 Middle Tennessee State University will announce Monday that it has secured funds for a $66 million first-phase project to build a student-athlete performance center behind Floyd Stadium as part of a three-phase, $100 million-plus plan to upgrade athletics facilities.

President Sidney A. McPhee, along with Trustees Board Chairman Steve Smith and Athletics Director Chris Massaro, will reveal details about the project at a rally-style ceremony at the Emmett and Rose Kennon Athletics Hall of Fame.

NewsRadio WGNS will carry the announcement live beginning with a special edition of All Sports Talk at 5pm. The announcement is expected around 5:15pm.

The three-story structure will house training, strength and conditioning, and equipment centers and be built on the site of the current weight and gameday rooms adjacent to Murphy Center. Football’s locker room and meeting rooms and personnel offices will be moved from Murphy Center into the new facility.

The design of the new facility will begin immediately, with project completion expected before the start of the 2024 Blue Raider football season. GMC+HOK, a team that helped to build similar projects at Vanderbilt, Auburn, Georgia and other universities, will oversee design of the project. The State Building Commission recently approved MTSU’s plans for the project.

“The importance of enhanced facilities became clear to me during the shifts in the national collegiate landscape prompted by the realignment of athletic conferences,” McPhee said. “The decision we made to remain with Conference USA aligns squarely with our desire to bring about meaningful change in our athletics campus.”

McPhee said the project underscores the university’s commitment to providing the highest level of performance in competition and in the classroom.

“Imagine … a place that is inviting, highly functional and home to a state-of-the-art fan experience,” McPhee said. “A place where our student-athletes get the training and tools they need – on the field and in the classroom – to reach their greatest potential. A place that reflects the ambition we in this room share for the future of Blue Raider Athletics. And a place that serves as an even greater tourism destination for Murfreesboro and Rutherford County.”

Smith, a member of MTSU’s Athletics Hall of Fame, credited private donations, which allowed the first phase to be approved by the state.

“Many loyal Blue Raider fans and supporters stepped forward, quietly, to give this effort the momentum necessary to bring us to this day,” Smith said. “I am thrilled to see us take this first, important step.”

The Student-Athlete Performance Center (SAPC) is phase one of the next big investment into Blue Raider Athletics facilities, following previously approved projects for the Golf Performance Center, softball facility upgrades, and the outdoor tennis complex.

Phase two of the plan would feature an upgraded Murphy Center entrance, a large interior atrium and a ticket office. Internally, a training and skill center for the men’s and women’s basketball programs, featuring a regulation 94-foot NCAA court, would also be constructed.

In phase three of the plan, a multipurpose indoor practice facility would be constructed to the east of the SAPC. The climate-controlled facility would provide all 17 Blue Raider athletic programs an indoor amenity to practice and train regardless of weather conditions.

“This is transformational for our department, for our University and for our community,” Massaro said. “We will be able to better develop our players, attract top-notch recruits, and make our student-athlete experience second to none. This will truly represent a turning point for Blue Raider football.”

“Small dreams stir no man’s heart,” Senior Associate Athletic Director and Senior Women’s Administrator Diane Turnham said. “This is a big dream and one that we can accomplish together. This facility plan will not only transform the Athletics Department, but it will also transform the University.”

“This is a game changer for our program,” said football Head Coach Rick Stockstill. “This will be huge in recruiting and player development while playing an integral role in our program reaching its full potential. This will be very rewarding for our current players and all the former players who sacrificed so much to make this happen. I am grateful to all of those who have made this possible.”

And, with the first-phase move of football offices and locker rooms to the new facility, the football program’s current office space and locker rooms in the Murphy Center will grant more space to other Blue Raider teams, most notably men’s basketball, presenting additional opportunities for facility investment in the future.

“With the landscape of college athletics continuing to evolve, it’s important that we position ourselves to attract and retain high-level student-athletes well into the future,” said Nick McDevitt, head men’s basketball coach. “The Build Blue Campaign and these transformational athletic facilities will help make that possible. It’s exciting to know that the dream and vision, by many, of what this place can look like will soon be a reality.”

“I am excited about the future of our athletic department and how this facility will impact every aspect of it,” said Rick Insell, head women’s basketball coach. “This is a win-win for everyone in that it will enhance the student-athlete experience as well as the fan experience in regard to renovations. We already have a great deal to offer at Middle Tennessee and this will only add to it.