Commentary: A Cleverly Crafted Reply to an 1897 Letter to the Editor - Asking if Santa is Real? 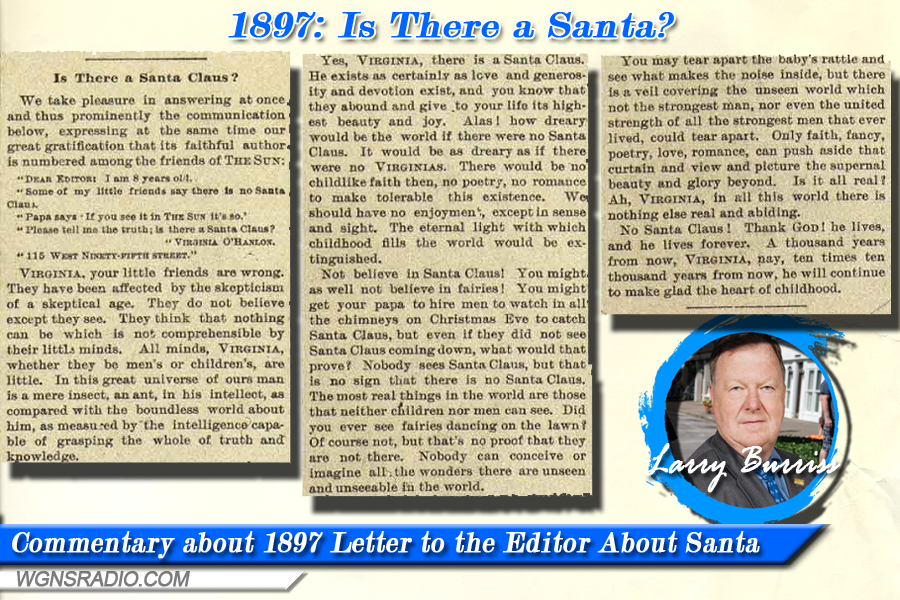 A letter to the editor written by a little girl in 1897 became famous, because the editors reply was cleverly crafted. With more, here is MTSU Professor Larry Burriss...

Scroll down to read the above commentary by Dr. Larry Burriss...

(Commentary) Verbatim: “In the fall of 1897, 8-year-old Virginia O'Hanlon had a problem: some of her friends had told her there was no Santa Claus. Her father suggested she write The New York Sun's "Question and Answer" section, so here's what she wrote:”

“Dear Editor: I am eight years old. Some of my little friends say there is no Santa Claus. Papa says ‘If you see it in 'The Sun' it's so.’ Please tell me the truth, is there a Santa Claus?”

Editorial writer Frank Church replied to Virginia's question in what has become one of the most famous editorials in newspaper history. But because the newspaper had a policy of keeping its editorials anonymous, Church was not identified as the author until after his death in 1906.

This holiday exchange has become part of American popular culture and is often reprinted during the holiday season. As for the little girl in the story, she grew up and became a teacher. She earned a master's degree from Columbia University and a doctorate from Fordham University. Later she became a teacher and school administrator.

What seems particularly interesting about the editorial is it goes beyond simply answering a little girl’s question. Church could have told her “No, there isn’t a Santa Claus,” and then explained all the reasons why. Or, he could have just said “Yes, there is a Santa Claus,” but what good would that have done, besides confirm what children around the world believe?

But instead, in fewer than 500 words, Church used symbolism and logic to answer a little girl’s question on an adult level. He sustained her child-like faith, while at the same time illustrating ideals that would appeal to adults.

“Yes, Virginia, there is a Santa Claus” resonates today as much as it did in 1897. It is a piece of linguistic legerdemain as magical as the subject it addresses. - I’m Larry Burriss.”