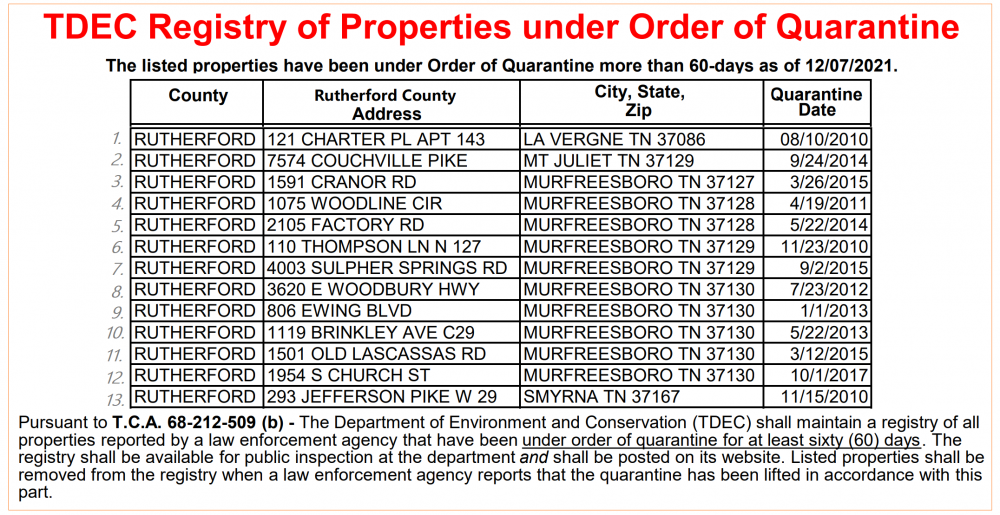 List Above from the TN Dept. of Environment & Conservation

About 60-miles East of Murfreesboro in Grundy County, Tennessee, authorities are on the lookout for a woman accused of manufacturing methamphetamines.

ADVERTISEMENT
The Grundy County Sheriff’s Department is asking for residents in nearby counties to help locate Wanda Faye Boswell.

The Tennessee Bureau of Investigation reports, "It is estimated that there are about 800 methamphetamine labs operating at any given time in the Tennessee.”

According to the Grundy County Sheriff's Department, Ms. Boswell has outstanding warrants for the manufacturing and delivery of methamphetamine, possession of Schedule II drug, false reports and failure to appear in court.

Shelby County in West Tennessee currently has the highest number of properties under quarantine, due to the discovery of a reported meth lab. Shelby County has close to 100-properties that have been quarantined for 60-days or more (list as of 12/07/2021).

Scroll down for more on meth labs in Tennessee...

Meth Labs in Tennessee and Beyond

A report that was released four years ago ranked Tennessee 8th on the top ten list for states that have had the most meth-related seizures.