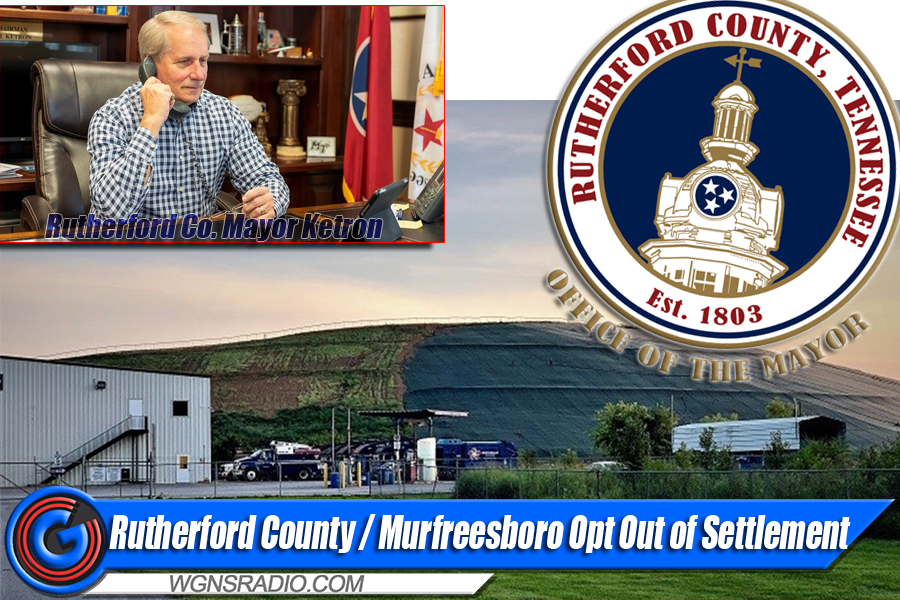 (MURFREESBORO)  Rutherford County Mayor Bill Ketron announced that the county will also be opting out of a class action lawsuit settlement from BFI Waste Systems of Tennessee, LLC, a subsidiary of Republic Services and the owner/operator of Middle Point Landfill.

The lawsuit, filed in March 2021 in federal court, was brought by local resident, Justin Burriss, with the assistance of a Michigan law firm, It alleges that operations and noxious odors originating from Middle Point Landfill are “causing damages through nuisance, negligence, and trespassing.” The lawsuit further indicates that the odors have had a tremendously negative effect on property values.

Residents and residential property owners within three miles of the landfill should have received communications regarding the proposed settlement. It is important to understand that the settlement is still subject to approval from the U.S. District Court for the Middle District of Tennessee. For more information about the settlement, residents and other interested parties should visit www.LSCCOUNSEL.com/MiddlePointLandfill or call 1-800-536-0045.

The City of Murfreesboro released a statement on Friday (1/14/2022) explaining that while the City is not a member of the class of potential claimants covered by the lawsuit, they nonetheless want to be expressly excluded from the settlement.

The news release stated, “The City of Murfreesboro has had no involvement in this lawsuit. Moreover, although the city owns property within a third of a mile of Middle Point Landfill, and therefore Murfreesboro is not a member of the class of potential claimants or plaintiffs covered by the lawsuit because the class is limited to natural human beings. Government entities and private corporations and other companies are not natural persons and, therefore, are not part of the class.”

County Mayor Ketron explained, “Like the City of Murfreesboro, Rutherford County is not a member of the class covered by the settlement.  However, out of an abundance of caution, we are choosing to expressly opt out of this settlement even though Rutherford County is the closest owner of property since its property adjoins Middle Point Landfill.”

In conclusion, Ketron agreed with the city that the settlement’s terms are vague and insufficient at best and do not mitigate all of the existential ongoing issues and potential future problems.