UPDATED (Video and Photos) - MURFREESBORO, Tenn. – The driver of a pickup truck that was hit head-on jumped out of his vehicle and pulled two men and one woman from a wrecked car moments before it burst into flames. The accident occured on Thursday morning (01/20/2022). A total of five vehicles were involved in the crash.

BELOW: Video from the Murfreesboro Police Department

Continued - Accident on SE Broad Street - scroll down for photos...

A male driver and a male passenger that were in a black 2018 Infiniti G-37 car, were critically injured and taken to the hospital.  A female passenger was treated at the scene for a broken finger.

Authorities told WGNS NEWS that the driver of a white 2012 Ford F350 truck, who was hit head-on, pulled three people out of the car seconds before it caught fire. After the car caught fire, the blaze spread to the mans pickup truck.

Murfreesboro Police officers and Murfreesboro Fire & Rescue firefighters responded to the multi-vehicle crash at 6:04 Thursday morning. The wreck was on SE Broad Street, near the intersection of Dr. Martin Luther King, Jr. Blvd (near the CVS pharmacy that sits at that intersection).

Firefighters quickly put out the fire.

The preliminary investigation shows the driver of the Infiniti was traveling south on Broad Street, at a high rate of speed and veered into the oncoming lane of traffic, according to police.  The 2-door car also struck a 2017 Dodge Ram 1500 (silver in color).  The driver of the Infiniti then collided with a  2007 Honda Odyssey minivan (also silver in color), according to MPD Public Information Officer Larry Flowers.  The van left the road and stopped several yards away behind a nearby business.

A tire from the Infiniti came off and struck a 2008 Nissan Titan truck (silver in color), causing it to crash.

Because of the severe injuries, the Fatal Accident Crash Team (FACT) responded.

The drivers of the three other automobiles were not seriously hurt.

Police had to shut down SE Broad Street for five hours to fully investigate crash. The wreck was investigated by the MPD Fatal Accident Crash Team (FACT).

Law enforcement report that charges could be pending. The investigation of the crash is ongoing.

Click below photo to see complete slideshow of pictures... 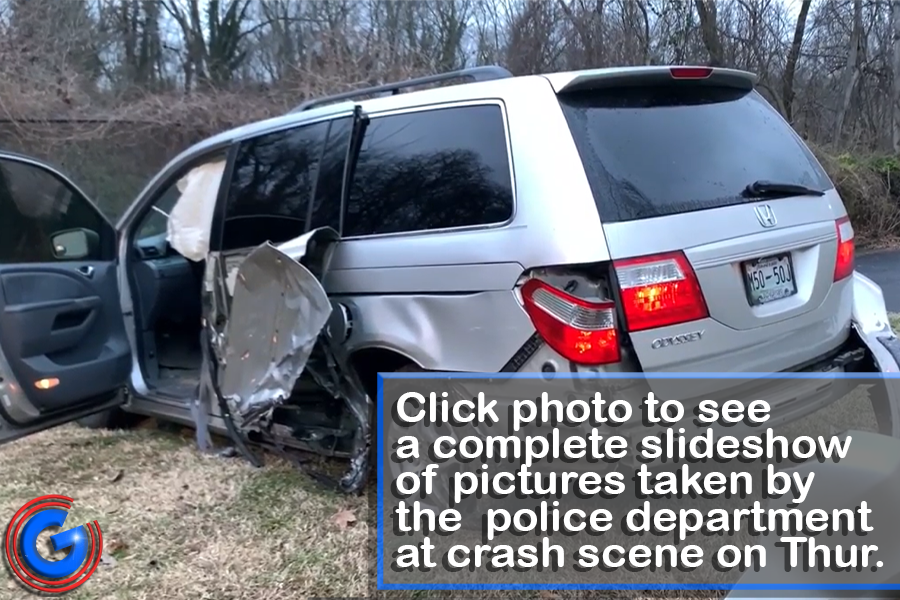 Continued - Previous News Story:  7AM NEWS STORY (Previously Reported) -  As daylight approached the early morning hours of Thursday, there was a serious auto accident that occurred in Murfreesboro. The wreck was reported at around 6, Thursday morning (01/20/2022). The accident happened on South East Broad Street at Dr. Martin Luther King Jr. Boulevard near the CVS drugstore.

Murfreesboro Police Public Information Officer Larry Flowers told WGNS NEWS, “A car and a truck collided head-on and burst into flames.  The driver and passenger of the car were taken to the hospital, listed in critical condition.  Five vehicles total were involved in the crash. No other injuries reported.”

Again, five vehicles were involved in the crash and there was a fire reported when the car and truck collided. Two accident victims are now in critical condition.

Flowers told WGNS that the investigation into what caused the wreck remains active.

The accident was described as those passed by the area as a “Major accident” and two people were seriously injured.  Evidently, the intersection had to be shut down for several hours while police investigated what went wrong.