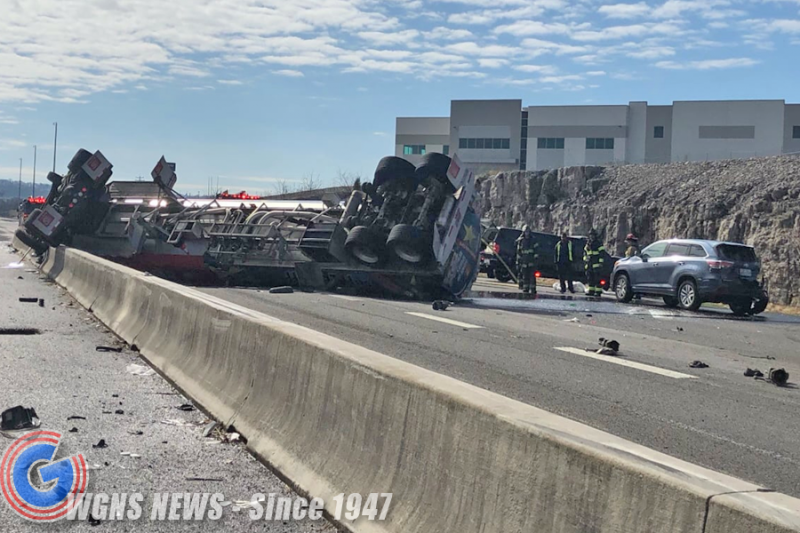 Click above photo to see multiple pictures - Interstate 24 had to be shut down on Thursday morning, due to an accident involving a semi-truck overturning at the Rutherford County-Davidson County line at mile marker 63. The wreck happened in the eastbound lane headed towards Chattanooga, but impacted both lanes.

According to the investigation by the Tennessee Highway Patrol, around 10:00 o'clock Thursday morning (3/17/2022), a Toyota Highlander was traveling eastbound on I-24 (toward Chattanooga). The driver of the SUV swerved right to avoid colliding with another vehicle. The Toyota was then in the same lane as a Kenworth tanker. The big rig clipped the SUV, and then rolled and crashed into a concrete barrier at mile marker 63.

Paramedics treated everyone at the scene and miraculously no one had to be transported to the hospital.

All east and west lanes of I-24 were closed to traffic near the Rutherford-Davidson County line (mile marker 83).

The Kenworth tanker was transporting approximately 8,800 gallons of gasoline. The initial THP report indicates that 90 per cent or more of the fuel spilled onto the roadway. However, when the tanker was up righted around 3:00PM, the tanker was empty.


Two of the westbound lanes of I-24 opened around 5:30PM. T-DOT (Tennessee Department of Transportation) officials determined that the entire section of roadway where the spill occurred had to be resurfaced before it could be open to traffic. 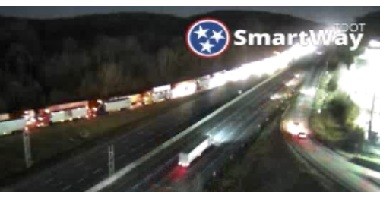 Crews worked all night re-paving eastbound lanes of I-24 near the Rutherford-Davidson County line (mile marker 63).

Almost 9,000 gallons of fuel from the tanker made it impossible for a "quick repair" of the roadway. Crews had to come-in and resurface that section of the interstate before traffic could be allowed to drive on it.

The new surface was finished and the interstate was completely re-opened before 3:00AM early Friday morning (3/18/2022). The eastbound lanes of I-24 were closed for approximately 16-hours.

(Left Photo) T-DOT Smart Way traffic camera shows westbound traffic being detoured off I-24 near the 63 mile marker until the emergency road construction was completed shortly before 3:00 o'clock early Friday morning (3/18/2022). That section was closed for approximately 16-hours.