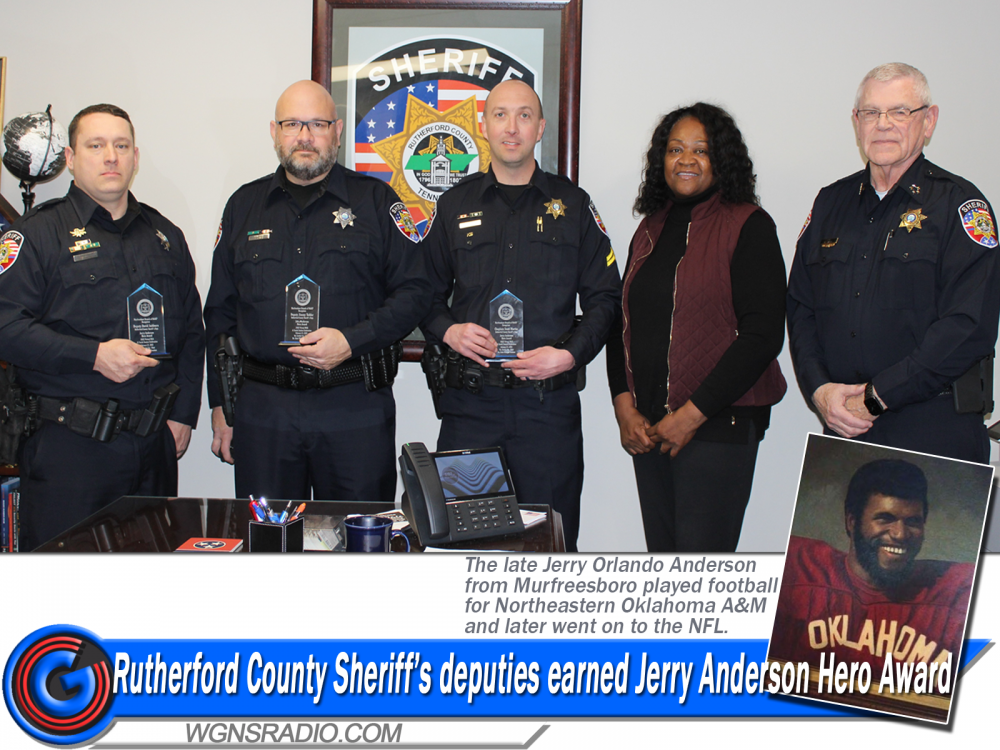 The deputies worked together to save the life of a 2-month-old infant who was being choked by his father.

Carolyn Cox, chair of the MLK Breakfast Celebration Committee, presented the awards to the deputies with Sheriff Mike Fitzhugh.

Sheriff Mike Fitzhugh commended the deputies for their quick actions in responding to the baby’s needs and detaining the father.

“Their actions saved the life of this baby,” Fitzhugh said. “They are true heroes for keeping him alive.”

Scroll down to read more about the awards...

Martin, Anderson and Jimmy Tedder responded to the family home where the father was choking the lifeless and blue baby on Dec. 15, 2020.

Deputies rescued the baby from the father. Cpl. Martin started CPR until the baby took a breath and cried. Martin handed the baby to the mother and helped other deputies detain the father.

Ashburn arrived just as the baby stopped breathing a second time and performed CPR on the baby until he breathed again.

Jerry Anderson was a Murfreesboro native who played in the NFL with the Cincinnati Bengals and the Tampa Bay Buccaneers. He was fishing when he saved two boys from drowning but he drowned in the Stones River May 27, 1989 in Murfreesboro.

The Murfreesboro Chapter of the NAACP memorializes Anderson with the annual Jerry Anderson Hero Award.

Scroll down to read about the late Jerry Anderson.

On May 27, 1984, he rescued some trapped motorists from floodwaters in Tulsa, Oklahoma. There, he pulled two people from the flooded Dirty Butter Creek. Reports indicate he told friends and the media that he felt guilty that he was unable to save a third person from a submerged car the same day.

As fate would have it, exactly five years later on May 27, 1989 and in his hometown of Murfreesboro, he took a young man by the name of Dwight Ogleton, Jr. and another boy fishing along the banks of the Stones River. The waters were still flooded from a recent rain.

While fishing, Anderson noticed two young boys by the names of Brad Logsdon and Josh McFarland casting a line nearby. After spotting the two, he witnessed water overtake one of the children with the second falling in while trying to save his friend.

Anderson jumped into the swollen Stones River and rescued both boys. After the children were safe, Anderson was swept underwater two or three times and never resurfaced.

The NAACP later named the Jerry Anderson Hero and Humanitarian Award in his honor.