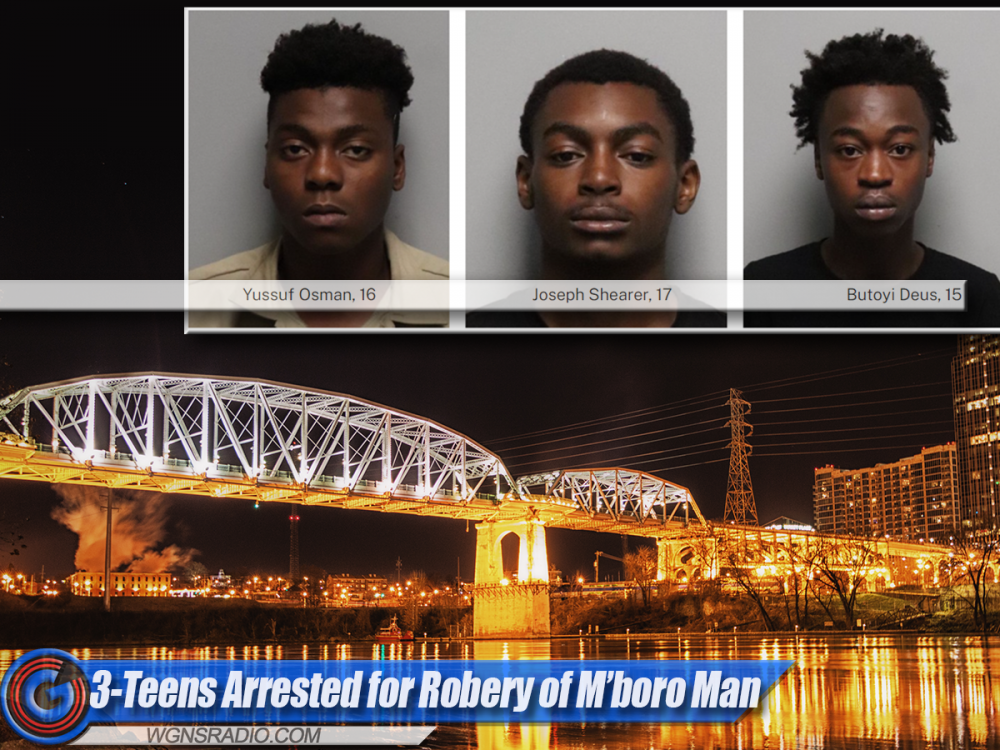 (Nashville, TN) A Murfreesboro man was robbed in one of the main tourist districts of Music City, but quick action by Metro Officers assigned to the Entertainment District in downtown Nashville led to the apprehension of three teenagers.  The teens were apprehended within minutes of the late Saturday night robbery. Police say the trio used a stolen pistol to rob the 28-year-old Murfreesboro man of his car keys on the downtown side of the Seigenthaler Pedestrian Bridge.

Metro Police say that 16-Year-old Yussuf Osman was identified by the victim as the gunman during a show-up after the arrests. Police also released the names of 17-year-old Joseph Shearer and 15-year-old Butoyi Deus - all of which were charged with aggravated robbery. Additionally, Osman is charged with gun theft. The recovered pistol was reported stolen in Mt. Juliet, Tennessee (Wilson County) last year.

The victim telephoned 911 at 11:06 p.m. to report that he had been robbed. He said the robber with the gun put it to his abdomen and went through his belongings, ultimately taking the keys to his car. He said the teens fled across the pedestrian bridge toward Nissan Stadium.

Officers working the Entertainment District Initiative on UTVs quickly responded to the area. Osman and Deus were taken into custody on Shelby Avenue. Osman dropped the gun during the apprehension. Shearer was found hiding behind semi-trailers on Crutcher Street.

The victim reported the robbers had used the key fob to unlock his car from a distance, leading him to believe they were trying to find it in order to go through it or steal it.