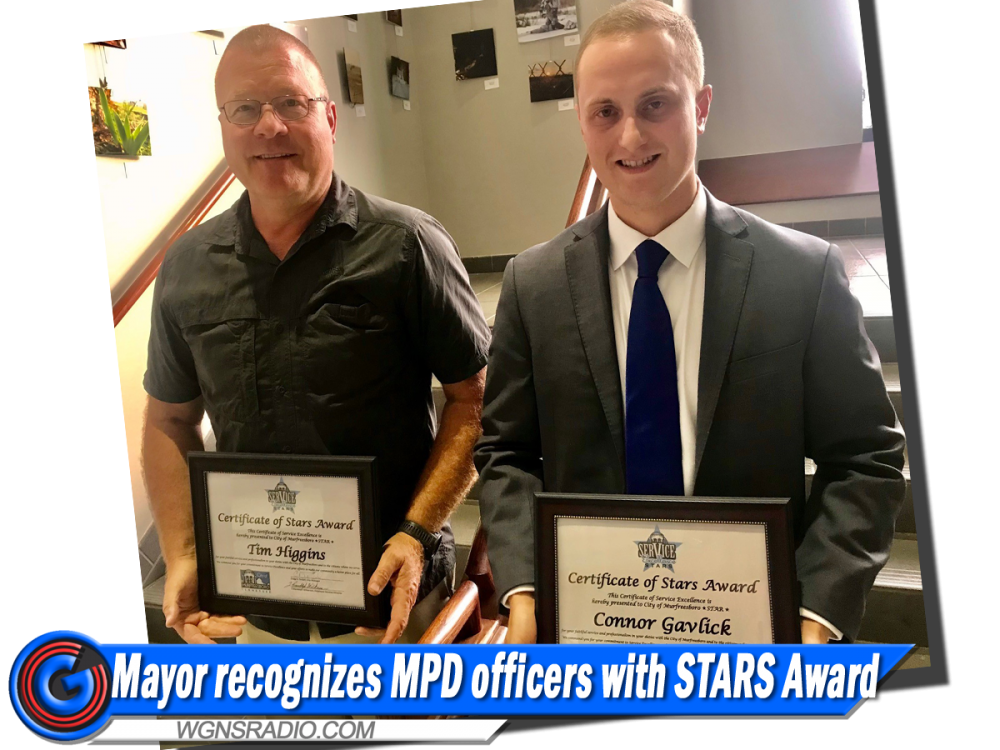 The following description by Sgt. David Harrison nominated the officers for the STARS award: “On April 30, 2022, at approximately 1445 hours Officer Connor Gavlick #1108 was traveling east on I-840 near Exit 61 going home after his shift. Officer Gavlick observed a vehicle leave the roadway. The vehicle then over corrected and began to roll down the interstate. Officer Gavlick witnessed the driver get ejected from the vehicle. He called MPD dispatch via his radio and they contacted the Rutherford County Sheriff’s Office (RCSO), Rutherford County EMS (RCEMS), and Tennessee Highway Patrol. Officer Gavlick checked on the driver who had serious injuries and performed first aide until assistance arrived.  Sgt. Tim Higgins #242 who was off work and traveling down I-840 stopped and assisted Officer Gavlick.  Once Sgt. Tim Higgins arrived, Officer Gavlick went to the crashed vehicle to check on a baby that he was being told was in the vehicle.  The infant appeared to be uninjured and was securely fastened in a child restraint device.  Sgt. Higgins and Officer Gavlick provided first aid to a severely injured patient and provided direction to other people who stopped at the crash to assist until RCSO, RCEMS, and THP could arrive and take over the investigation.  [. . .the driver . . . was lifeflighted to Vanderbilt for treatment. Officer Gavlick and Sgt. Higgins did an outstanding job providing first aide and care to the driver who had critical injuries prior to RCEMS arrival.”
ADVERTISEMENT

STARS stands for “Succeeding Through Attitudes Reflecting Service Excellence.” They are examples of representing the City in a positive light, exhibiting the core values, and creating a better quality of life for citizens.

Congratulations to Officer Gavlick and Sgt. Higgins of the Murfreesboro Police Department for being named recipient of the April 2022 STARS Award for Outstanding Performance.