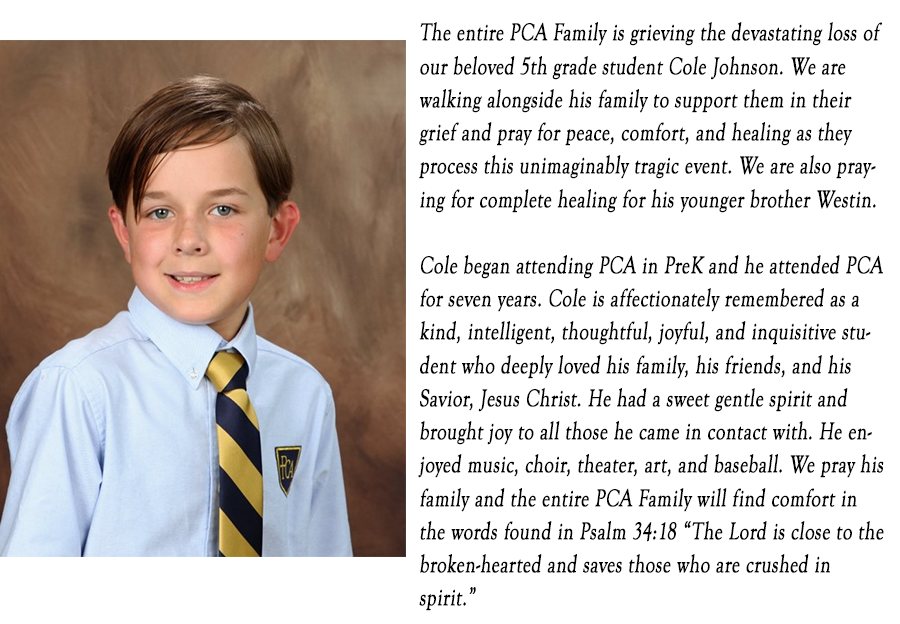 Providence Christian Academy released the following statement after the death of 5th grader Cole Johnson, who died in the Monday auto accident on Lascassas Pike in Murfreesboro: The entire PCA Family is grieving the devastating loss of our beloved 5th grade student Cole Johnson. We are walking alongside his family to support them in their grief and pray for peace, comfort, and healing as they process this unimaginably tragic event. We are also praying for complete healing for his younger brother Westin.

Cole began attending PCA in PreK and he attended PCA for seven years. Cole is affectionately remembered as a kind, intelligent, thoughtful, joyful, and inquisitive student who deeply loved his family, his friends, and his Savior, Jesus Christ. He had a sweet gentle spirit and brought joy to all those he came in contact with. He enjoyed music, choir, theater, art, and baseball. We pray his family and the entire PCA Family will find comfort in the words found in Psalm 34:18 “The Lord is close to the broken-hearted and saves those who are crushed in spirit.”
ADVERTISEMENT

MURFREESBORO, Tenn. – The Murfreesboro Police Department (MPD) Fatal Accident Crash Team (F.A.C.T.) continues to investigate a head-on collision that took the life of an 11-year-old child and left five others injured on Monday, May 23.  The crash occurred on Lascassas Pike just east of DeJarnette Lane around 3:15 p.m.

The preliminary investigation finds the driver of a gray 1993 Toyota Camry traveling south on Lascassas Pike veered into the oncoming lane of traffic and then collided with a 2021 red Toyota Corolla. MPD Public Information Officer Larry Flowers told WGNS NEWS, “Charges could be forthcoming.” Photographs of accident scene here.

Several MPD officers were first on scene and began CPR on an 11-year-old male victim who was riding in the backseat of the Corolla. Medics with the Murfreesboro Fire & Rescue Department (MFRD) took over life-saving measures. The child was later pronounced dead at the hospital.

The driver of the Corolla, an adult male, was trapped inside the car. MFRD firefighters used hydraulic equipment to free the injured man. An adult female and a 9-year-old male also suffered injuries. The man and woman were taken to the hospital. The female is in critical but stable condition, and the man is in stable condition. The 9-year-old was flown to Vanderbilt Children’s Hospital by a LifeFlight helicopter and is listed in stable condition.

Murfreesboro Mayor Shane McFarland stated on Facebook, "Our thoughts and prayers are with the Johnson family and Providence Christian Academy’s students and staff."

The male driver of the Camry was also injured and taken to the hospital. A male passenger suffered minor injuries. At last check, they both were stable.

Everyone was wearing seatbelts. The crash remains under investigation by members of the F.A.C.T. team. Again, MPD Public Information Officer Larry Flowers told WGNS NEWS, “Charges could be forthcoming.”