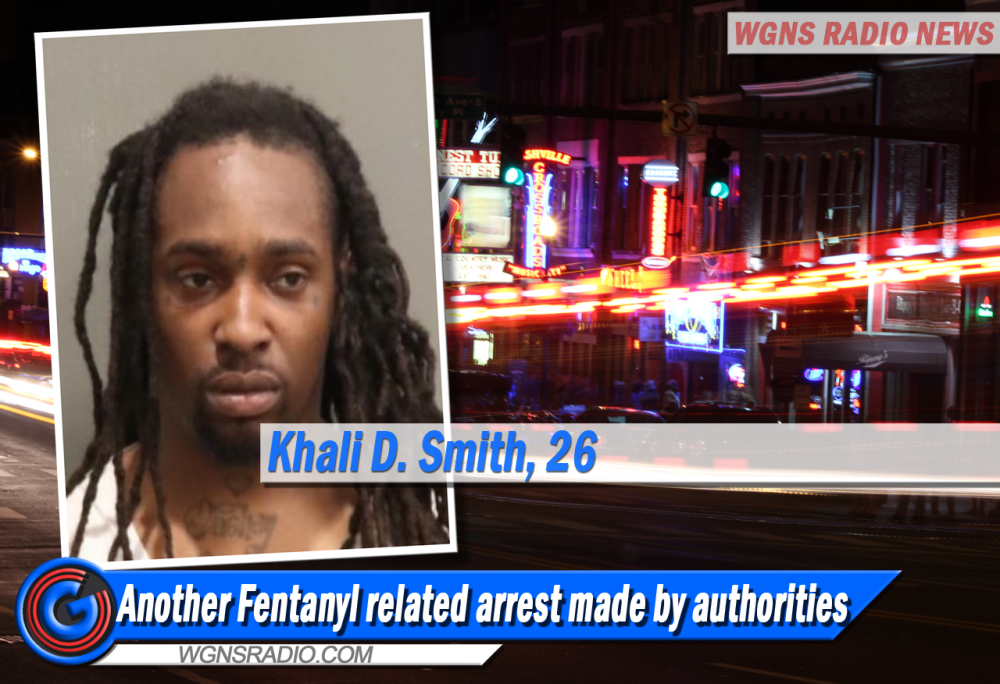 A man with previous felony convictions in Rutherford County has been arrested in Nashville. The suspect was one of several men arrested this past Friday night on fentanyl, cocaine and gun charges as part of a continuing Specialized Investigations Division undercover narcotics operation in the downtown Nashville area. WGNS has confirmed the subject is now facing federal charges.

26-Year-old Khalil D. Smith is charged in a federal complaint issued on Thursday, May 26, 2022, with possession with intent to distribute fentanyl, possession of a firearm in furtherance of a drug trafficking crime, and being a convicted felon in possession of a gun. If convicted, Smith faces a mandatory minimum sentence of five years and up to life in federal prison.

“The sale and distribution of fentanyl and fentanyl laced drugs poses a real life-threatening danger to our community and cities across America,” Chief John Drake said. “I am grateful to the United States Attorney’s Office and our federal partners for working with us and adopting this case and others as warranted.”

During the May 20th operation, undercover detectives encountered a man near Hall of Fame Park who said he could get them cocaine. He made a telephone call to have cocaine delivered, according to police. A short time later, Smith and another man arrived. Smith allegedly sold three grams of white powder to an undercover detective for $200. As officers moved in to make the arrests, Smith reportedly tried to run away, but was quickly apprehended, as were the other two individuals.

From Smith, detectives recovered two bags of white powder containing a total of eleven grams that tested positive for fentanyl, one bag of white rocks that tested positive for cocaine, 23 Xanax bars, and 21 grams of marijuana. The three grams of powder sold to the undercover detective also tested positive for fentanyl. At the time of his arrest, Smith was armed with a nine-millimeter Beretta semi-automatic pistol loaded with 17 rounds. Smith has previous felony convictions in both Davidson and Rutherford Counties. In Rutherford County, Smith was convicted on four counts of “Criminal Simulation” in October of 2018. In Nashville, Smith was convicted on past drug and weapon charges.

For those seeking treatment for drug addiction, the Community Overdose Response Team (CORT) can help. CORT is a free and confidential resource to help find drug and alcohol treatment for individuals who are at risk of an overdose. The service is offered free of charge regardless of health insurance status. The team works with an individual to determine the appropriate level of care (e.g., detox, residential, or outpatient treatment, etc.). To make a referral or learn more about this resource for our community, call CORT at 615-687-1701.