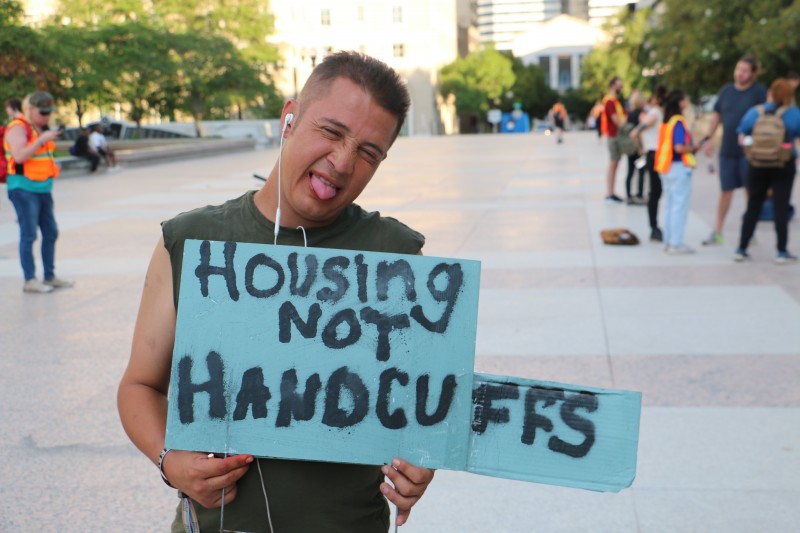 It's no secret that homelessness has grown in recent decades, and it's not abnormal to cross paths with someone homeless whether it be in the street, on a corner or sidewalk, the park, or off the freeway. Despite how some may feel about the cause of their homeless condition, it is undisputable that they exist, and they are growing.

Earlier this year, the state presented it's response to this growing presence: State Bill 1610. The bill makes camping on public property a Class E felony, directly affecting the homeless. It also makes soliciting or camping (begging or sleeping) a Class C misdemenor punishable by a $50 fine or community service. The bill became law on July 1st.

In an attempt to push back on police sweeps over homeless camps that would undoubtedly be disbanded, Open Table Nashville and other non-profit activist groups organized a non-violent Civil Disobedience event in Nashville the night the law went through. Their goal: send a message to lawmakers that homelessness is not a crime. "This is not a criminal problem, it's an economic one" said Nick, one of the apx. 100 protestors involved on the night of the 1st. Howard Allen, one of the organizers with the Poor Peoples Campaign, spoke with us about his thoughts on the bill and his involvement with the homeless community.

The protestors moved out from Legislative Plaza at 7:45 PM down Anne Dallas Dudley Blvd and eventually further through downtown. The intention was to loop around to Riverfront Park, but due to the amount of police precense that way, the protestors settled down at Commerce Center Park off 3rd Avenue. The march and display was powerful nonetheless with an energetic reception, drawing attention from bystranders and passersby who may not have been aware of the bill before hand. Drawing that support was not hard; When people march with a clear message such as "Homelessness is not a crime", you won't find many opposed. Here is some of the crowds energy as they marched and chanted through broadway.

After settling downtown by 9:00 PM, the crowd was still apx. 50-60 strong. This was the portion of the protest where action was taken through Civil Disobedience- sleeping overnight on public property (effectively committing the felony crime the TN law was meant to enforce). Lawyers spoke with those intending to camp out overnight, educating them on their rights as protestors. During the education of their rights, the protestors were instructed to split into two groups: Those who did not intend to be arrested, and those who did.

Protestors who did not mind the risk of arrest formed a group and signed contact forms that prepped them for possible legal action. The Protestors who still wanted to go home in the morning formed another group that would follow orders from the police (to remove themselves from public property) if they were given.

On behalf of Open Table Nashville (an interfaith non-profit who fights homelessness/poverty cycles in the area), two resource coordinators, Will & Chase, took some time to spread the word about what the organization is doing in regards to the billl and the homeless condition as a whole.

Around midnight, a police officer arrived just along the protest site, but did not engage the protestors in any uncivil way. The protest was successful in the end, as no one was hurt, arrested, and the law was not enforced on this group. However, largely-backed support like this can't reach the homeless every night, and sweeps on homeless camps may certainly be in Tennessee's future. To find out what you can do to help, please contact info@opentablenashville.org or visit opentablenashville.org

For a copy of the new bill that sparked the protest: https://bw-wgnsce-site.s3.amazonaws.com/media_library/Tennessee-2021-SB1610-Chaptered.pdf