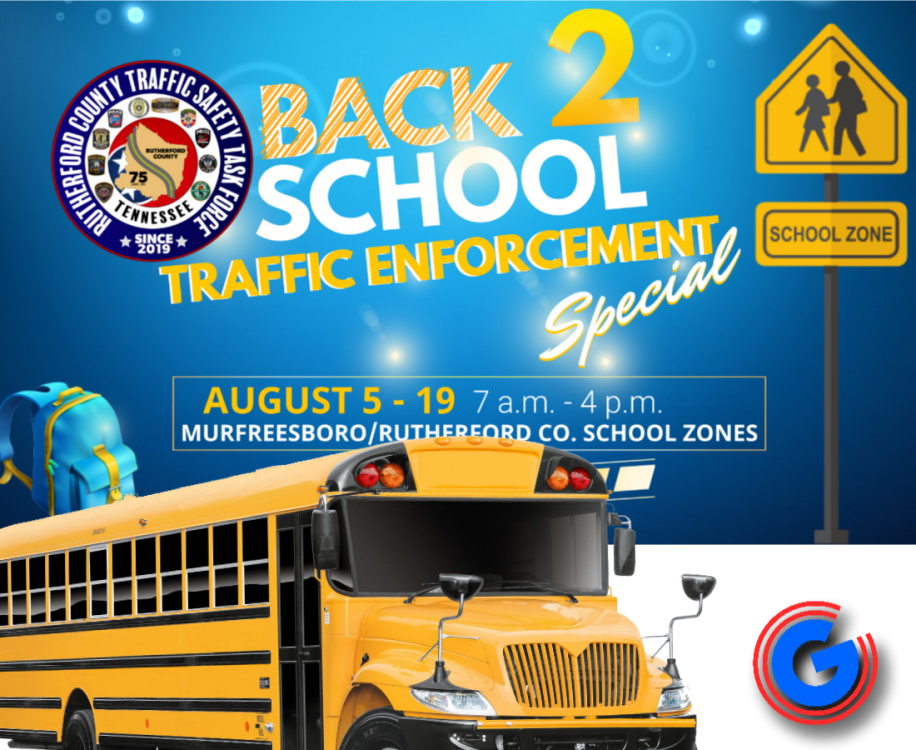 Law enforcement officers will focus on traffic safety in school zones when students return to school beginning this Friday on August 5th.

Teams of officers in Rutherford County and the cities will concentrate on drivers speeding in school zones, using cell phones while driving and failing to wear seat belts.

“We want to start the school year off as safe as possible,” Walker said. “Our goal is to increase officer presence and not have any crashes inside the school zones.”

“The safety of the school zones are the responsibility of the motoring public,” Miller said. “Let's work together to keep students safe.”

When the yellow lights are flashing the school zone is active and the speed limit is reduced to 15 mph.

Under Tennessee law, if drivers speed in a school zone, that constitutes reckless driving and the driver can be arrested, lose driving privileges and have the vehicle towed and impounded.

“Our goal is to bring awareness to drivers that school is back in session and to get kids to their schools as safely and efficiently as possible,” Boyd said. “We ask drivers to be aware of their surroundings when entering and exiting active school zones.”

“We will make sure people are obeying the speed limit in school zones and bring awareness to hands-free violations and the use of seat belts,” Rodgers said. “We want to remind people to be safer in school zones.”

La Vergne Police Chief Chip Davis said the safety of kids is one of the officers’ top priorities in the coming weeks as they get ready for the new school year.

“Tragedy can happen in an instant so we're asking everyone to be careful, put the phone down, and help our kids get to and from school safe every day,” Davis said.