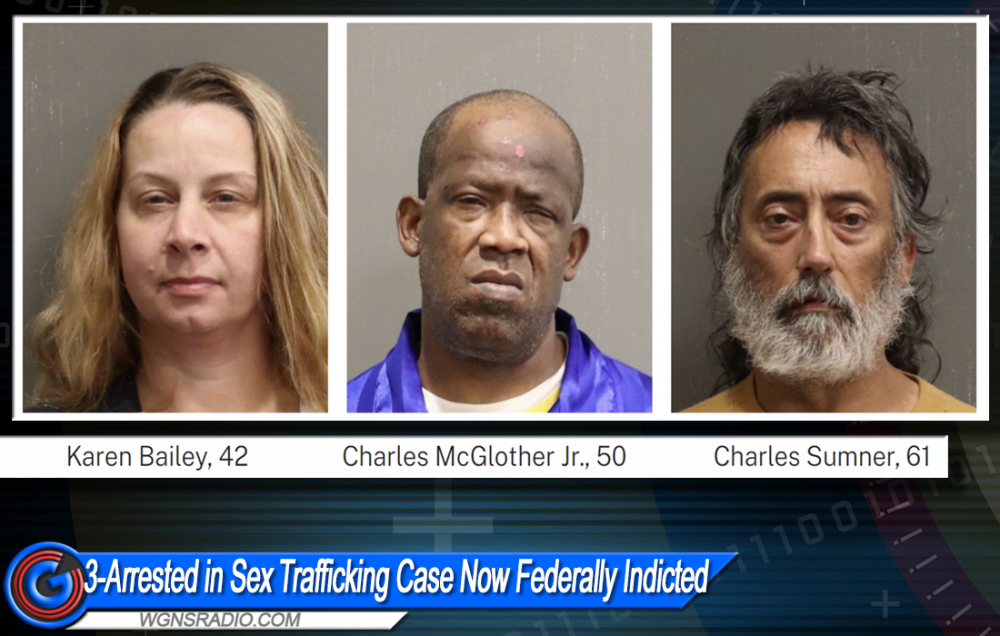 (ANTIOCH, TN) A federal indictment was unsealed this week that charges three Nashville individuals in a sex trafficking and drug distribution conspiracy that operated from a house in in nearby Antioch.

42-Year-old Karen Bailey, 50-year-old Charles McGlother Jr. and 61-year-old Charles Sumner, all of Antioch, were indicted Monday and charged with conspiracy to engage in sex trafficking, conspiracy to distribute, and distributing, cocaine, methamphetamine, and fentanyl. The indictment further charges the trio specifically with trafficking three women for sex by force and coercion for the purpose of financial gain. The indictment also charges McGlother with two counts of federal firearms violations, for being a convicted felon in possession of a firearm and for possessing of a firearm in furtherance of a drug trafficking crime.

The three were arrested as part of an investigation by the Metro Nashville Police Department's Human Trafficking Section on March 31, 2022. Search warrants were also executed on that day at a Fesslers Lane business and a home on Bluewillow Court, where the defendants and some of the trafficked women were residing. Several trafficking victims were found on the premises, and some of those victims were living in makeshift sheds without electricity behind the main house.

Documents filed with in United States District Court allege that the trio has operated a human trafficking operation in the Nashville area for over a decade, and dozens of women are believed to have been recruited under false pretenses and coerced and forced into commercial sex acts. Court documents allege that the conspiracy specifically targeted women who were recovering drug addicts with small children who needed housing. The defendants allowed the women and their children to move into their house, got them addicted to drugs, and then coerced them to perform commercial sex acts when they were unable to pay their rent. The defendants further maintained control over the women by not allowing them to ever take their children out of the house without a chaperone.

Court documents also allege that the defendants provided drugs to the trafficked women to keep them addicted, and sold drugs to commercial sex customers and others outside of the sex trafficking conspiracy. McGlother owned several businesses, including a music studio and a food truck, which were used to sell drugs.

Sumner, who had posted bond after being taken into custody in March, was arrested at his home this morning. Bailey and McGlother remain in custody. If convicted, the defendants face a mandatory minimum of 15 years and up to life in federal prison.

Partnering with the MNPD’s Human Trafficking Section in this investigation were Homeland Security Investigations and the Bureau of Alcohol, Tobacco, Firearms & Explosives. Assistant U.S. Attorney Brooke K. Schiferle is prosecuting the case.