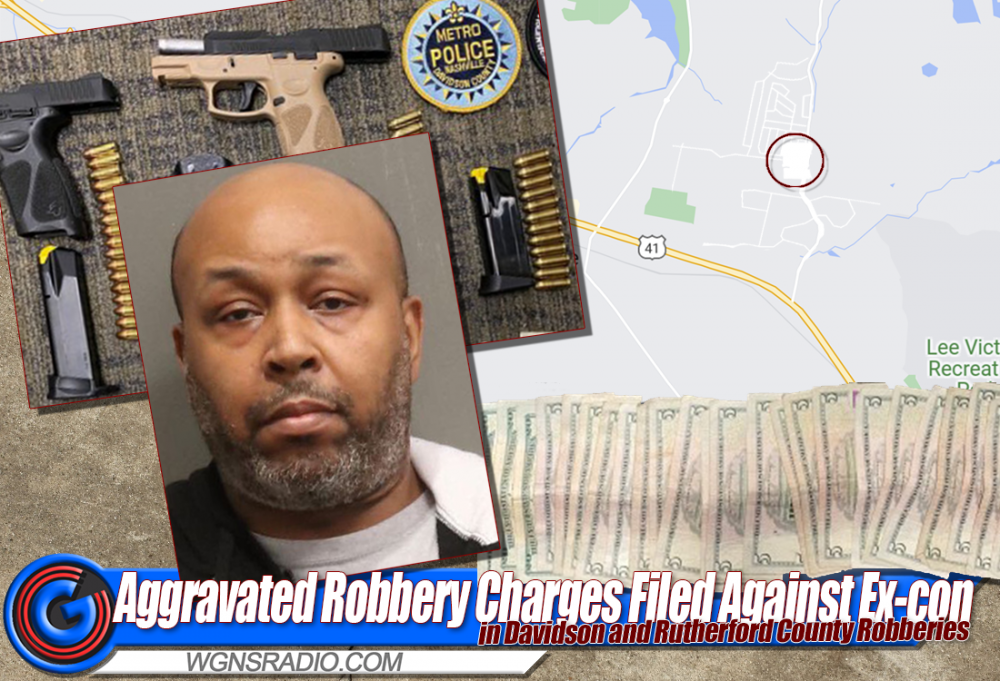 Picture of mugshot, cash and guns, along with a police badge located with Turner's possessions, were released by Metro Police.

An investigation spanning nearly a month into a series of armed robberies at Nashville area dollar stores culminated Sunday night with the arrest of ex-con Terrance Turner who, through surveillance, was taken into custody shortly after robbing Dollar Tree at 2806 Smith Springs Road near Percy Priest Lake, according to Metro Nashville Police.

In addition to robberies in Nashville, the suspect is also accused of robbing a Dollar General Store in Rutherford County. The store he's accused of holding-up in LaVergne is located on Fergus Road and reports indicate it was robbed on January 8th. Detective Matt Fracker is investigating the case and filed charges against Turner on Monday (Jan. 23, 2023). After Turner goes through the court process in Davidson County, he will stand before Judge Lisa Eischeid in Rutherford County and face one count of Aggravated Robbery and one count of Possession of a Weapon by a Convicted Felon.

In Nashville, 43-Year-old Turner is charged with seven counts of aggravated robbery in relation to holdups at four businesses, which means he's accused of striking one of the stores three times and another store twice (Alleged location of stores robbed below).

In addition to the aggravated robbery counts, Turner is also charged with unlawful gun possession by a convicted felon and use of a firearm in the commission of a dangerous felony. Turner had a pistol when he was arrested Sunday night. A search of his Davenport Drive home led to the discovery of a second firearm. He has prior convictions for two counts of attempted 2nd degree murder and especially aggravated kidnapping.

The investigation was led by the Metro Violent Crimes Division with assistance from Special Response Team officers and detectives from the South and Midtown Hills Precincts.