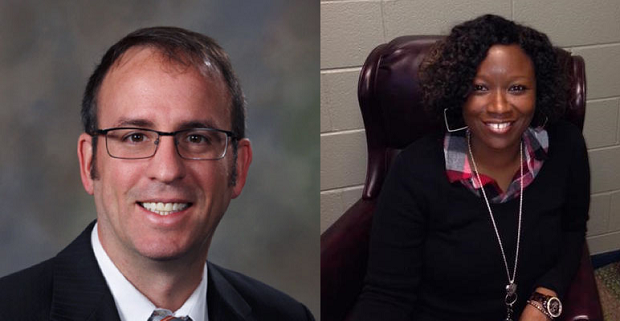 Bryson will replace Roseann Barton who retired in May. He has served over ten years as a teacher and assistant principal with Metro Nashville Public Schools and has most recently served as principal of Middle Tennessee Christian School in Murfreesboro.

"Adam is an incredible leader. He is committed to excellence and has a passion for students and the community," says Dr. Linda Gilbert, Director of Murfreesboro City Schools. "I look forward to the contributions he will bring to our district."

Bryson received his Bachelors in Interdisciplinary Studies and Masters in Educational Leadership from Middle Tennessee State University. He is a graduate of Vanderbilt's Principal Leadership Academy of Nashville. Additionally, Bryson is a Certified Classroom Organization and Management Program (COMP) Trainer and a Tennessee Department of Education Leadership Coach.

Robertson joins MCS from Hamilton County Schools. Robertson has served as principal for Calvin Donaldson Academy since 2013. Previously, she served in the roles of assistant principal, literacy coach and classroom teacher.

These leaders will join the existing leadership team of Murfreesboro City Schools as the district moves forward in creating an environment of success for each of our 8,600 school children.

Additionally, two assistant principals, Natalie Hopkins and Christy Robinson, are transitioning to new schools this school year. The school administrative teams for the 2017-2018 school year are:

Murfreesboro City Schools is a district of twelve schools committed to the academic and personal success of each child.