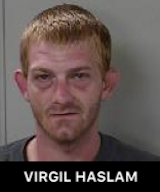 A 34-year old Palm Court man has been arrested, two days after allegedly burglarizing a home in the 12-hundred block of Maple Street.

Virgil Haslam was identified through video by Detective Ed Gorham on Sunday. On Monday, the defendant was seen walking down South Church Street and was stopped. Haslam was brought back to the Murfreesboro Police Department, where he was interviewed by Gorham and confessed to the burglary.

A television was recovered from a North Academy home identified by Haslam and returned to the owner. The defendant was arrested for aggravated burglary, theft over 500-dollars and vandalism under 500-dollars. Bond was set at nine-thousand dollars and he will be in court May 9th.