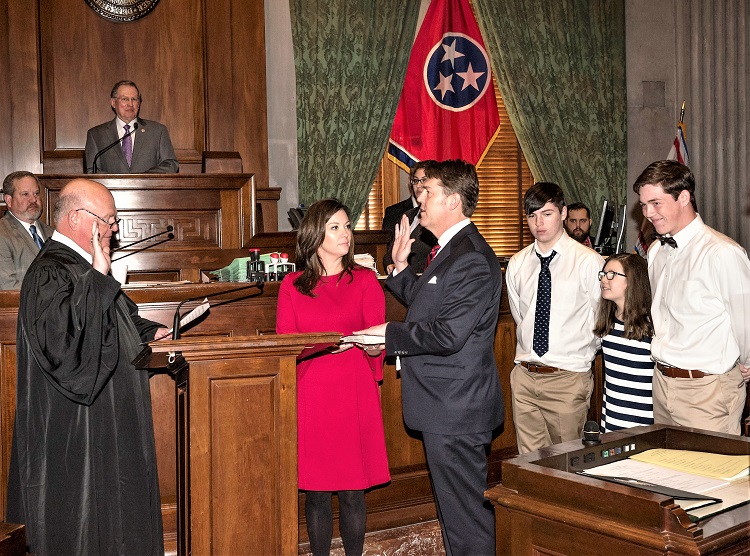 Shane Reeves has been sworn in as the newest state senator, representing Rutherford and four other mid-state counties. NewsRadio WGNS' Bryan Barrett has more:

It's been a long four-months for Reeves since announcing November 8th he would seek the seat left vacant by Jim Tracy's appointment to the USDA. But Thursday, he was sworn-in by Judge Don Ash:

Governor Haslam, who requested to be on-hand for the swearing-in, along with members of the Rutherford County delegation and members of the upper chamber heard from Senator Reeves as he thanked his friends and family for standing by him during the process and said he looks forward to getting to work:

The oath was administered in the Senate Chamber by Judge Don Ash as state senators met in a floor session.

Senator Reeves said, "I'm incredibly honored and humbled to serve the people of the 14th district and excited about this new opportunity. I will work very hard to honor the oath that I have taken today as I fulfill the duties of serving as their voice in Nashville. I look forward to working with Governor Haslam and my colleagues to improve opportunities for Tennesseans."

Senator Shane Reeves won in a decisive victory in a special election on Tuesday, March 13, 2018. He will complete the remainder of the term of former State Senator Jim Tracy, who resigned last year after being appointed to a federal position by President Donald Trump. Reeves' term ends in 2020.

Reeves, a small business owner, was joined by his wife, Amanda, his sons Will and Jack, and his daughter, Emma-White.