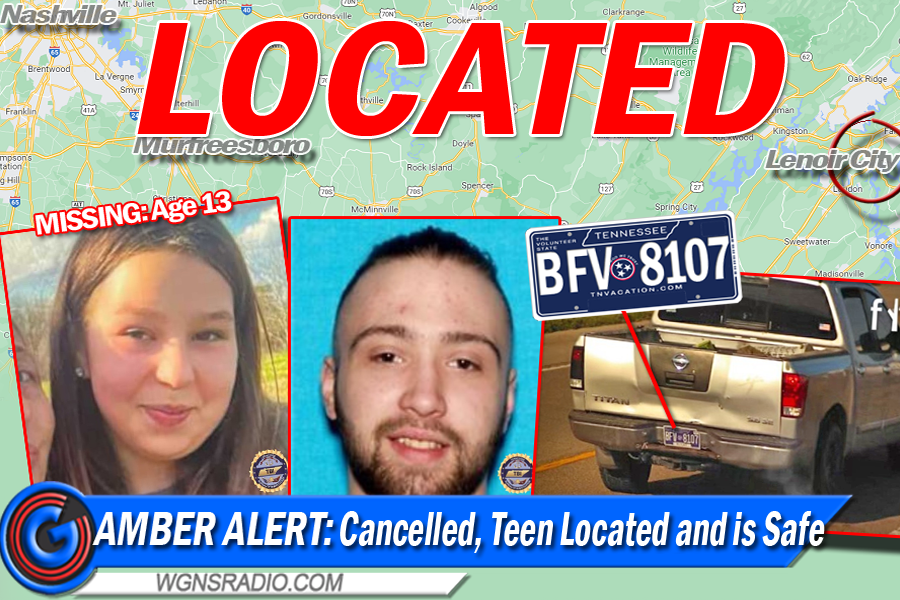 TEEN LOCATED - UPDATE: The Amber Alert issued by the Tennessee Bureau of Investigation has been cancelled. 13-year-old Smiley has been safely located. The TBI reports that 22-year-old William Nicholson is now in custody.

Again, the 13-year-old girl has been found and is safe. The suspect is in police custody.

ADVERTISEMENT
PREVIOUS REPORT: The Tennessee Bureau of Investigation issued an Amber Alert on Friday (03/04/2022). The Alert is for a missing 13-year-old girl who was last seen leaving her residence in Lenoir City, TN at 4:30 pm on Thursday, March 3rd.

The TBI reported that 13-year-old Alexis Smiley is believed to have left her home with 22-year-old William Tyler Nicholson. Again, the two reportedly left together from her home in Lenoir City, which is about 2-hours and 30-minutes East of Murfreesboro.

The man who Alexis is believed to be with is Tyler Nicholson, who is 22-years-of-age and has brown hair and brown eyes. The man is 5-foot 8-inches tall and weighs 167 lbs.

The TBI reports the two are believed to be traveling in a silver 2004 Nissan Titan, which is a 4-door pickup truck. The Tennessee license plate number is “BFV 8107.”

Authorities told the media on Friday morning that William Nicholson is wanted by the Loudon County Sheriff's Office for Aggravated Kidnapping.

HAVE YOU SEEN THE MISSING TEEN, SUSPECT or the SUSPECT VEHICLE?

If you know where Alexis Smiley or William Nicholson may be, or see this truck, please call the Loudon County Sheriff's Office at 865-458-9081. Or call TBI at 1-800-TBI-FIND.