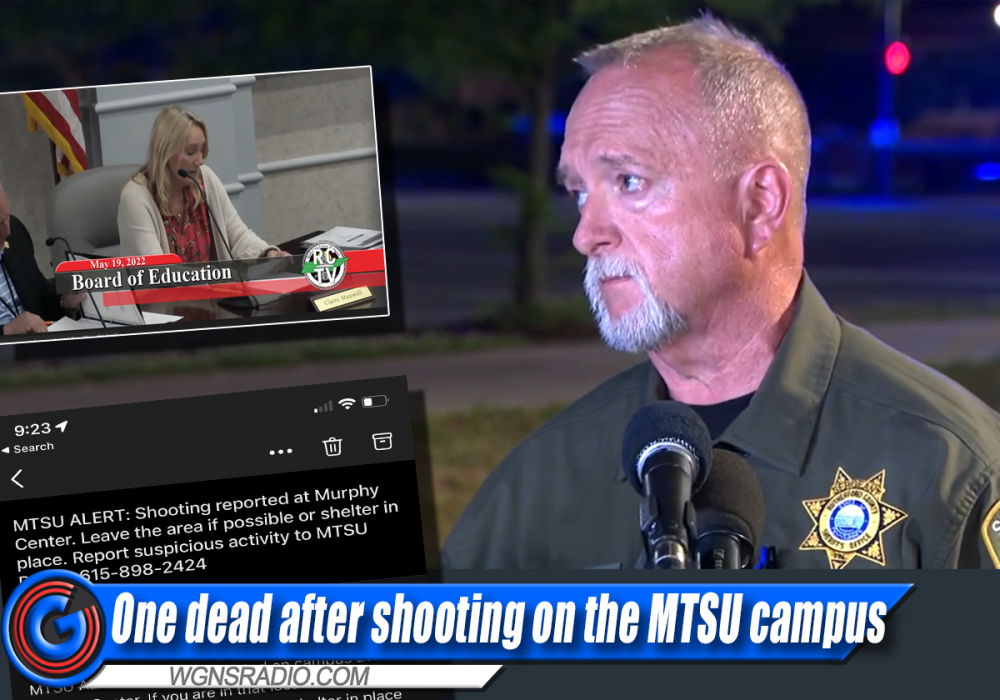 (Murfreesboro, TN) UPDATE: Accused gunman arrested - WGNS has more on the shooting death of one victim and the critical injury sustained by another on Wednesday night at MTSU... That was Rutherford County Sheriff’s Sgt. Dan Goodwin. The shooting occurred directly after the Riverdale High School graduation, which was held inside the Murphy Center. Killed was Hasani Sunny Gant Brewer, a Riverdale student who graduated with the class of 2022 Wednesday night.

Police developed a person of interest and filed a juvenile petition for first degree murder. By Thursday afternoon, police had the teen in custody. Again, the deceased victim has been identified as 18-year-old Hasani Brewer.  The other victim is a 17-year-old. His name will not be released. He is in stable condition. The preliminary investigation shows Brewer and the teen victim, got into an altercation, and the fight spilled over to the tennis court on the MTSU campus next to the Murphy Center. That’s when the shooter opened fire, killing Brewer, and injuring the 17-year-old.

ADVERTISEMENT
On the night of the shooting, detectives believe the teen suspect fled the scene of the shooting by simply blending into the crowd. That of course means the shooter got away as the call came in to dispatchers...“This was not a random shooting,” said Public Information Officer Larry Flowers. “The two victims and the shooter knew each other.”

Charges could also be pending for other known individuals. That part of the investigation continues. “This is a senseless act of violence that never should have occurred,” Flowers said. “We ask the public to join us in sending prayers to the families during this tragic and difficult time.”

Riverdale High School was closed on Thursday, but James Evans, Public Information Officer for the Rutherford County School system said… In addition to closing the school on Thursday, Riverdale also cancelled all football and cheerleading conditioning that was scheduled to take place on Thursday night at 6.

The Rutherford County Board of Education met for a special meeting on Thursday morning and Board member Claire Maxwell stated...Maxwell serves in Zone 5, which includes Riverdale High School. The meeting, which was scheduled last week, was held on Thursday for the purpose of board members interviewing candidates that applied to be the next Rutherford County Schools Director.

MTSU released the following statement on Thursday: “Our hearts go out to the Riverdale students, faculty and family members affected by Wednesday night’s tragedy. MTSU has offered support to Murfreesboro Police and other law enforcement agencies in their investigation. This was not an MTSU event, as Murphy Center is rented by Rutherford County Schools for its high school commencements, and we are not aware of any involvement or connection in the incident by members of the MTSU community. We will work closely with the school system regarding their needs for tonight’s ceremony for Blackman High School.”

Blackman High School will move forward with their graduation ceremony on Thursday night at 7PM (05/19/22).

A candlelight vigil is scheduled to take place on the Murfreesboro Civic Plaza Thursday night at 6.

Again, the investigation into the shooting continues. WGNS will update listeners as soon as more details are available. You can see the previous news story from Wednesday night (5/18/22) HERE.