Tennessee Ranks at #5 for States with Veteran Owned Businesses 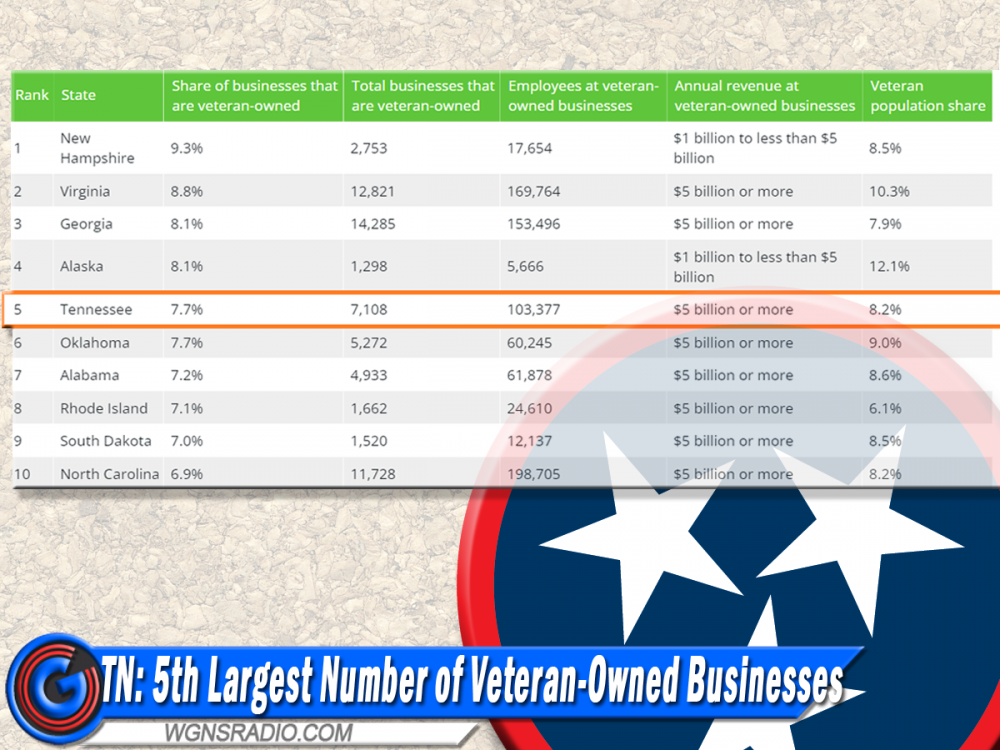 VETERAN OWNED BUSINESSES: A new report found that the Volunteer State has 5th most veteran-owned businesses in the country. Nationwide, the U.S. Department of Veterans Affairs reports there are about 19 million veterans living in America. Many of these people who served their country are starting businesses, joining an increasing number of Americans who sought to become entrepreneurs after the onset of COVID-19, according to the U.S. Census Bureau.

Currently, New Hampshire and Virginia report the largest share of veteran-owned Businesses. Tennessee, not far from the top, ranks at number 5 on the list for states with the most veteran-owned businesses.

When you look at large metro areas across the country, the area of Virginia Beach – Norfolk – Newport News, Virgina had the largest percentage of veteran owned businesses. There, 10.9% of all businesses are owned by veterans.

For Tennessee veterans on the hunt for a job, the state works with the American Job Centers that have dedicated staff who specifically assist veterans looking for long term suitable employment. Click here to learn more.

For more information, a detailed methodology, and complete results of states with high numbers of veteran owned businesses - you can find the original report on HireAHelper’s website: https://www.hireahelper.com/lifestyle/cities-with-the-most-veteran-owned-businesses/

More News Stories from WGNS Radio:
1.) Tennessee Unemployment Rate for MAY 2022 was a low 3.3%
2.) Name of man who drowned in Percy Priest Lake on Father’s Day Released
3.) Driver in fatal crash that killed 11-year-old in Murfreesboro Charged with Vehicular Homicide and DUI
4.) Appeal for Murfreesboro man convicted for killing Lascassas resident DENIED