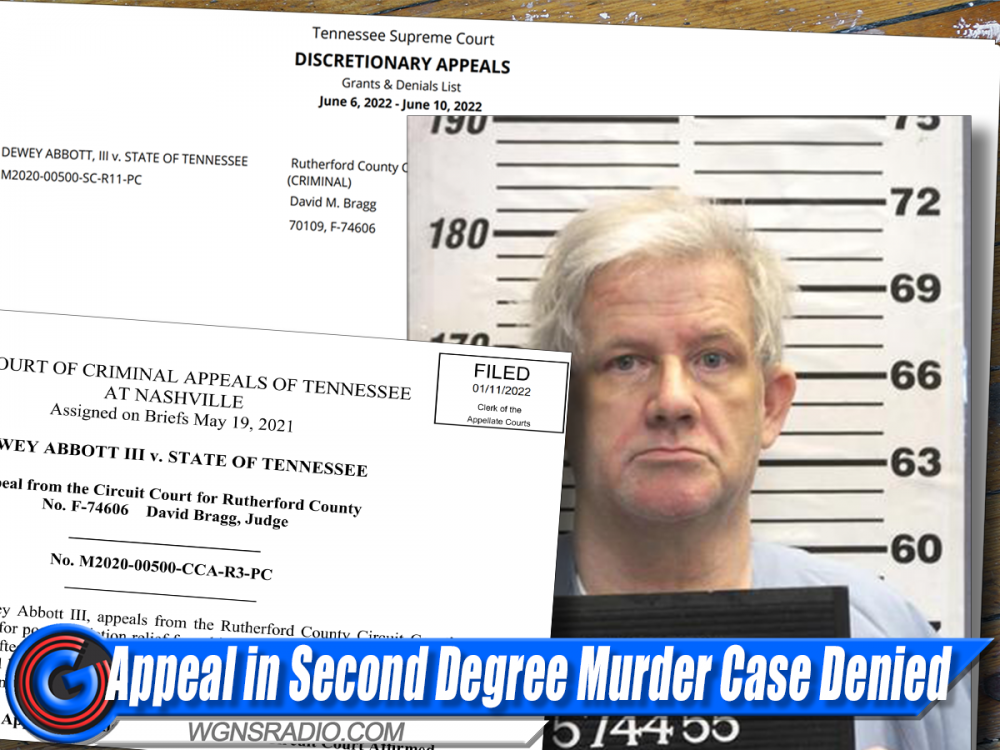 An appeal filed by a Murfreesboro man who was convicted for killing a Lascassas resident in 2015 has once again been denied - - this time, by the Tennessee Supreme Court.

In 2015, WGNS reported on the murder of a Lascassas man who was shot and killed at Kings Crossing Apartments in Murfreesboro (1710 East Northfield Boulevard). 40-Year-old Jesse Sliepenbeek was killed by Dewey Abbott, III in Abbott’s apartment.

6-Years-ago, Abbott appeared before Rutherford County Judge David Bragg and was convicted on a second-degree murder charge. 61-year-old Abbott, who was originally indicted for the first-degree murder Sliepenbeek, did not deny shooting and causing the victim’s death. Abbott asserted self-defense, and on December 9, 2016, the jury found him guilty of second-degree murder. He was later sentenced to 15-years in prison.

Abbott moved forward with filing an appeal in 2017 asking for post-conviction relief. Abbott alleged that he received ineffective assistance that failed to present defense witnesses that would further support his claim of self-defense. He also said his representation failed to introduce his "attempted 9-1-1 call before the shooting."

The Court of Criminal Appeals of Tennessee previously denied Abbott’s appeal from moving forward in May of 2021. Now, the Tennessee Supreme Court has confirmed the denial to his appeal, which was made public in the discretionary appeals list that was released on June 10, 2022.