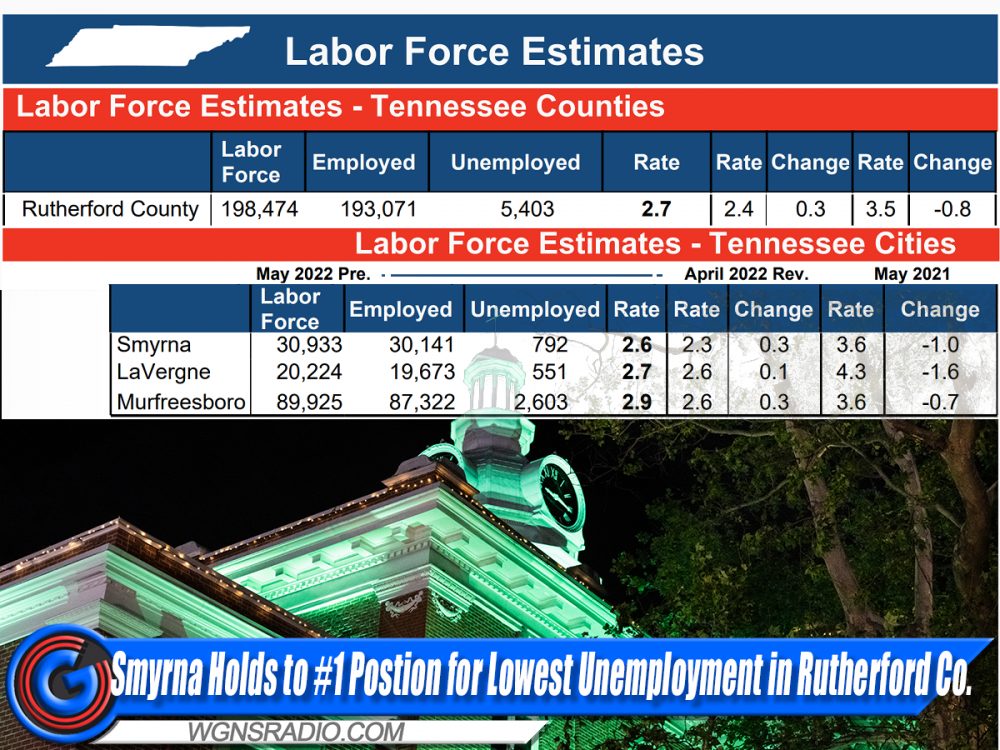 New data released by the Department of Labor and Workforce Development showed unemployment rates increased slightly during May in each of the state’s 95 counties. Even with the minimal increases, 93 of Tennessee’s 95 counties maintained rates lower than 5% for the month.

In the number 1 position for having the lowest unemployment number in the Volunteer State is Williamson County at a low 2.3%. That figure is an increase of 0.3 points over April’s revised rate of 2%.

Moore County had the second-lowest rate for May at 2.5%, followed by Wilson County at number 3 with a 2.6% rating, which tied with Cheatham County at number 4, also with 2.6%. Sumner County was ranked at number 5 on the list, tying with Rutherford County at number 6 - both holding a 2.7% jobless rate.

The increase in county unemployment followed the slightest uptick in the statewide unemployment rate in May. Tennessee's jobless number inched up to 3.3% in May, just 0.1 of a percentage point higher than the state’s all-time low rate of 3.2%.

A complete analysis of the May 2022 county unemployment data for the state of Tennessee’s 95 counties is available here.

Job seekers can find all the resources and the services they need to start their search, all in one place. TNWorkReady.com is the site to find a new job, develop new skills, or find classes where adult learners can earn a high school equivalency diploma.

One-on-one help with a Career Specialist is also available at nearly 80 American Job Centers located in counties across Tennessee. Job seekers can find the closest job center to them here.

See more of the WGNS Radio Headline News Stories: 1.) UPDATE: One Arrested in Checkers' Drive-In Gunfire Incident  2.) Speed a possible factor in I-24 Accident on Tuesday 3.) Special 5K Run/Walk to Honor Riverdale Graduate Killed Earlier This Year 4.) Rutherford County Schools Aim to Hire New Teachers and YOU Can Become a Teacher and Earn Your Teaching License While Teaching