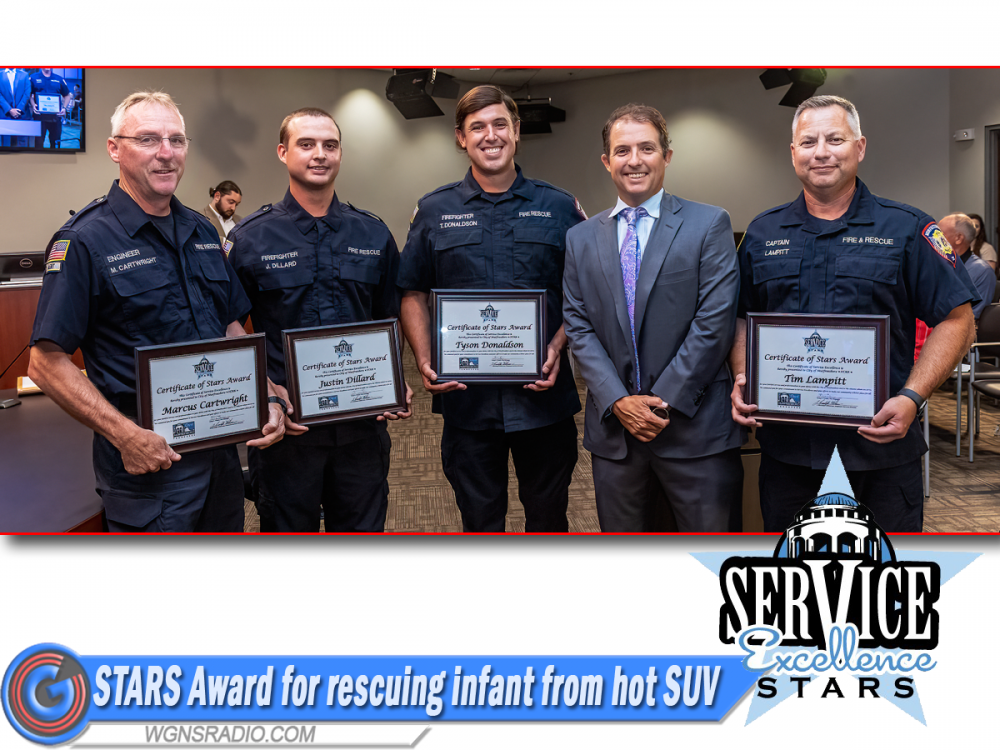 The following description by Jeff Wright nominated the officers for the STARS award:

“On Monday, June 13, 2022, at 5:16 p.m., Engine 9 was dispatched to the Kroger on Old Fort Parkway for a behavioral evaluation. Upon arrival, Engine 9 was notified by MPD that there was a possibility of a baby in a locked car. Firefighter Donaldson ran up to the car and was unable to see if the baby was in the car seat due to the dark window tint. Firefighter Donaldson broke the driver’s window out immediately in an attempt to unlock all the doors.  The electronic in the car would not work to unlock the door. Firefighter Goodyear then busted the window on the passenger door to help gain access. Engine 9s crew were able to unlock the backdoor and Engineer Cartwright jumped in the back seat to get the baby. See the WGNS News Story HERE.

The 5-week-old baby was under blankets and strapped into the car seat. Engineer Cartwright was able to unwrap and unbuckle the baby boy who was soaking wet from sweat. Engineer Cartwright pulled the limp baby from the car and immediately ran it over to the MPD officer’s car where it was much cooler. Engine 9s crew worked quickly to assess the baby and found that the baby was breathing but was extremely hot, diaphoretic, and lethargic. Engine 9s crew worked rapidly to remove the baby’s clothes and administer . . . oxygen. Firefighter Goodyear thought quickly and took the babies clothes to the water cooler on Engine 9 and wet them with ice cold water to help cool the baby down. Captain Lampitt held oxygen via a Nonrebreather on the baby while Firefighters Donaldson and Dillard assisted Engineer Cartwright with Medical care.

A NICU nurse named Mellissa Nicholson from [Ascension] St. Thomas Rutherford Hospital and her two children approached the scene and asked if we needed her assistance. She stated she saw the crew breaking windows and thought a child might have been involved. Engine 9s crew was grateful to have a subject matter expert come in and advise the crew. Nurse Melissa helped Engine 9s crew assess the baby and advised Engine 9 on the next steps she thought would be helpful. The assurance that Nurse Melissa gave Engine 9s crew was invaluable and helped successfully keep the baby alive until Rutherford County EMS arrived on the scene. Nurse Melissa went as far as to call the NICU to notify them of the situation that was coming their way.

The temperature outside was 97 degrees and the heat index was at 108 degrees at the time of Engine 9s arrival, and the baby had been in the car for a reported 20 minutes with the car off. The fast action from Engine 9s crew and the assistance from Nurse Melissa saved that child’s life. If that child had been in the hot car for a few more minutes, the outcome could have been very different. Without a doubt that beautiful baby is still on this earth thanks to Engine 9 and Melissa.”

MFRD reminds parents not to leave children or animals unattended in a vehicle, especially with extreme temperatures. Murfreesboro Police arrested the female driver for DUI and aggravated child neglect charges. According to NoHeatStroke.org, there have been more than 10 pediatric heatstroke deaths in the U.S. this year. More than 900 have occurred since 1998. These deaths could have been prevented if guardians had not left a child inside a hot vehicle.

STARS stands for “Succeeding Through Attitudes Reflecting Service Excellence.” They are examples of representing the City in a positive light, exhibiting the core values, and creating a better quality of life for citizens.

The STARS Service Excellence program recognizes outstanding employees who embody the city’s standards for service excellence and exemplify the city’s core service values. The purpose of the STARS award is to recognize and reward those employees who go above and beyond their normal job duties in providing outstanding customer service to internal and external customers.

Amelia’s Closet to hold Project ReStyle Fashion Show and Competition
On Tuesday, WGNS was joined in studio by the Murfreesboro Parks and Rec Department