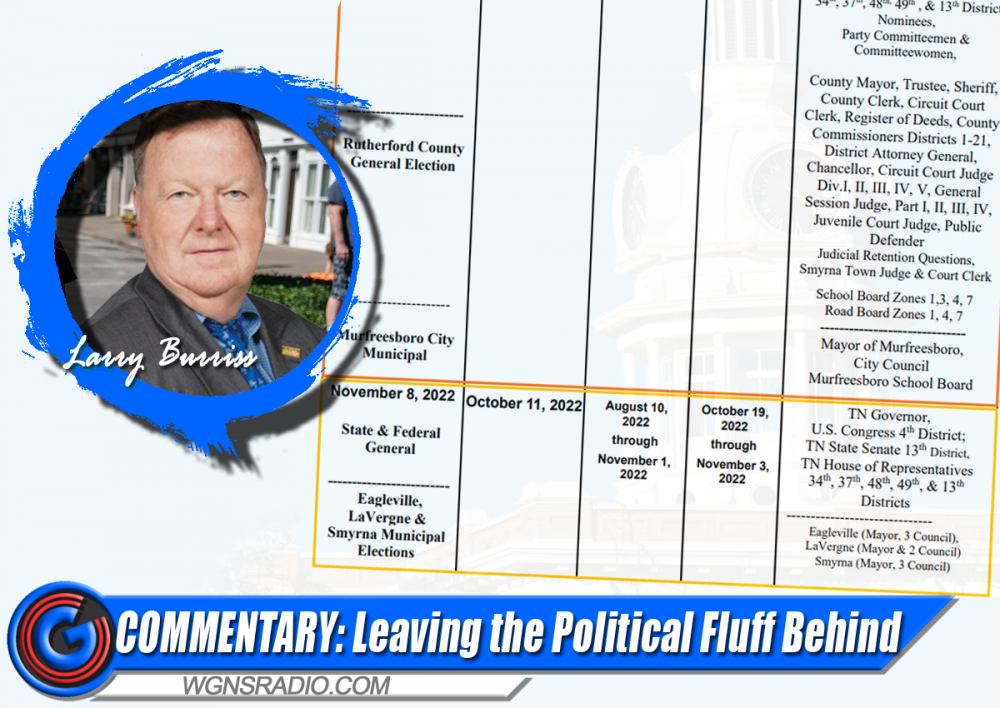 COMMENTARY: Dealing with the issues and leaving the fluff behind, is what some people wish politicians and news networks would do as we inch closer to the November 8th State and Federal Election date. With today’s media commentary, here is MTSU Professor Larry Burriss…

See the most recent election results for Rutherford County HERE.

Media Commentary with MTSU Professor Larry Burriss (Verbatim): “With all of the election preliminaries now out of the way, the 2022 mid-term elections can now begin in earnest. And if the last two months of Republican and Democratic primary coverage has shown anything, as in years past, massive doses of fluff and hype seem to be the norm.

Every two years, we seem to come up against the same problems in covering elections: the candidates dance around the issues, refusing to deal with specifics, and too often reporters let them get away with it.

And this campaign has hardly gotten off the ground and both republicans and democrats, at all levels, were accusing each other of ruining the economy, the climate and the schools.

Actually, accusations are fairly easy to cover, make for sensational stories and speculation, but actually shed little light on the policies and programs of the contenders.

If, as the candidates themselves have said, this is the most important election ever facing America, then it is also time for some serious news coverage of that election.

Pictures of the candidates shaking hands and standing in farm fields and in front of factory gates should not be allowed to substitute for hard questions and comparisons of the issues.

If this campaign is typical, the candidates' handlers will try to avoid confrontation and dealing with specifics. But that is precisely what is needed: reporters asking probing questions that deal with the specifics of recommendations and suggestions.

Over the last few months, reporters have shown an amazing ability to find out about the personal lives of the candidates, and often this coverage has overshadowed the real substance of the campaign.

But between now and November, we can only hope the candidates, and the reporters who cover them, will deal with the issues and leave the hype and fluff back in left field where it belongs. - I'm Larry Burriss.”

8.) Local Non-Profit to Welcome Ryan Campbell as Guest Speaker – He went on a World Expedition and Survived Plane Crash

9.) Young student receives special police escort to school, upon her first day to class after the death of her father, a LaVergne Police Detective