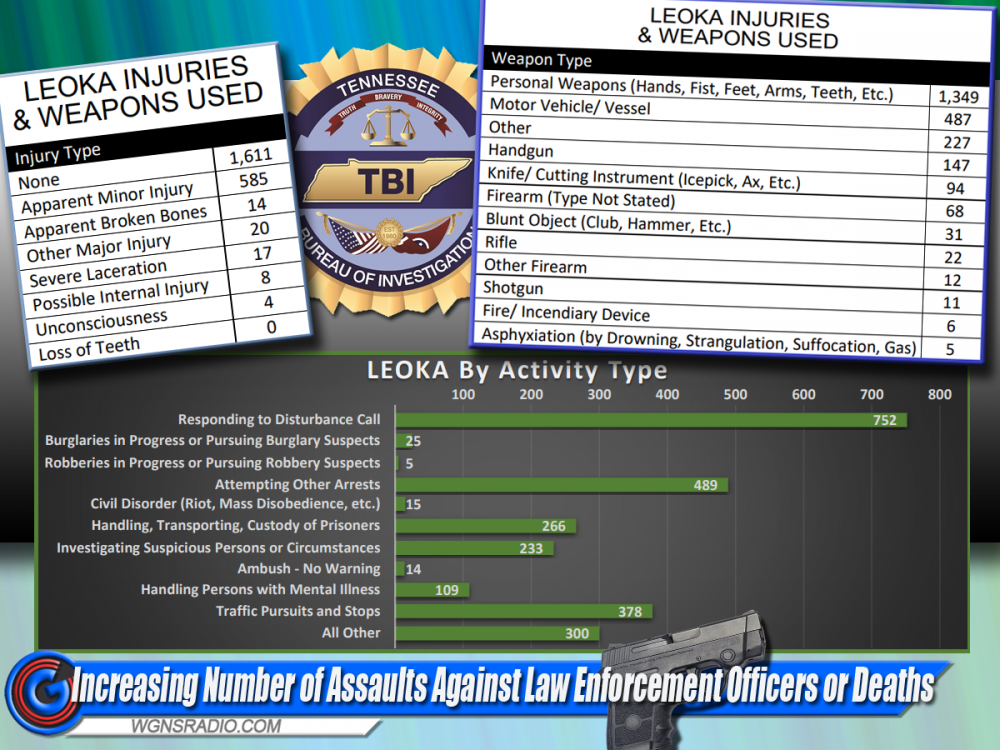 TENNESSEE – On Monday, the Tennessee Bureau of Investigation’s Statistical Analysis Center released its annual report that details the volume and nature of crimes directed toward law enforcement officers across our state. Findings in the report are put into the LEOKA Publication. LEOKA stands for Law Enforcement Officers Killed and Assaulted.

The report, ‘Law Enforcement Officers Killed or Assaulted 2021 (LEOKA 2021),’ draws upon data submitted to the TBI from agencies like the Murfreesboro, Smyrna and LaVergne Police Departments, along with the Rutherford County Sheriff’s Office and other agencies throughout the state. The types of crimes committed throughout the state are submitted through the Tennessee Incident Based Reporting System (TIBRS).

WEAPONS USED AGAINST OFFICERS: In looking at the variety of weapons used against officers who were assaulted or killed last year in Tennessee, it appears that the majority of suspects used their hands, fist, feet or even their teeth by biting officers – which were all calculated under the category of “Personal Weapons.” That said, ‘Personal Weapons’ were utilized in 54.8% of the incidents. In 19.8% of the cases, a motor vehicle was used to harm or kill officers in Tennessee last year. Firearms were used in 10.5% of the incidents and knives or other cutting instruments were used in 3.8% of the attacks. Hammers, blunt objects, fire, and strangulation (or unknown weapons) were used in about 10.5% of the remaining cases.

AGE OF OFFICERS: In breaking down the age of officers assaulted or killed last year in Tennessee, 62.9% were 34-years-old or younger. Making up a smaller percentage of the numbers, 21% of the officers killed or assaulted in 2021 were 35 to 44-years-of-age, while 11.5% were 45 to 54-years-old. Only 3.2% of officers killed or assaulted last year were 55-years-of-age or older. Age was unknown or not reported in 1% or fewer of the cases.

Additional findings of the LEOKA 2021:

“I am very proud of the efforts of all participating law enforcement agencies in the state to provide the data necessary to produce this report,” said TBI Director David Rausch. “Our combined efforts have resulted in a successful program and this annual report providing information on incidents involving assaults and deaths of our law enforcement officers.”

1.) Child shot and killed in a Smyrna park

ABOUT THE TBI: Since 1980, the Tennessee Bureau of Investigation has served as the state’s independent, lead law enforcement agency. Every day, focused on the agency’s core values of truth, bravery, and integrity, the TBI’s more than 700 employees provide a variety of advanced criminal and drug investigative, forensic, and criminal justice services to assist local, state, and federal law enforcement partners, to fulfill the agency’s promise, “That Guilt Shall Not Escape Nor Innocence Suffer." Learn more about the TBI online at tn.gov/tbi, and connect with the agency on Facebook, Twitter, and Instagram at @TBInvestigation. The full crime report that details officers kiled or assaulted in Tennessee is available for review and download on TBI’s website, at tbi.pub/reports.