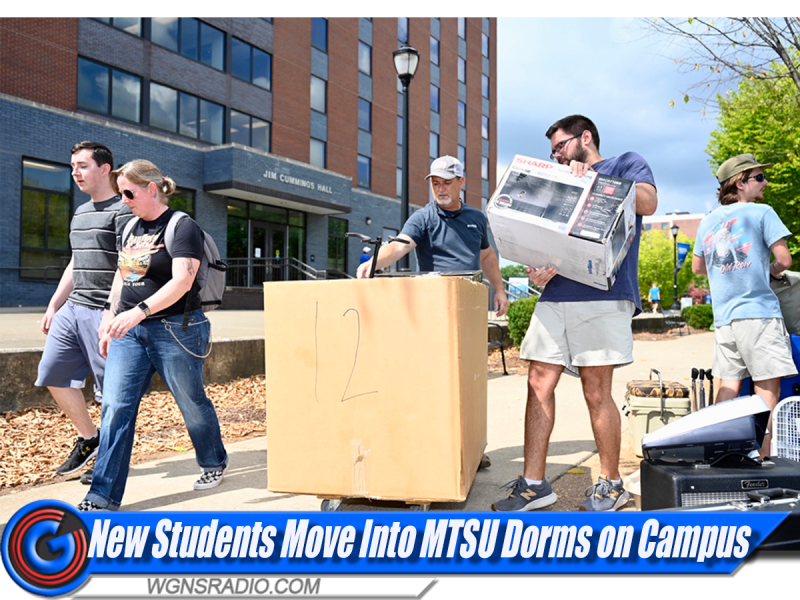 MURFREESBORO, Tenn. — Thousands of Middle Tennessee State University students continue to return to campus this week for the start of the fall semester and 2022-23 academic year starting Sunday, Aug. 21, with University Convocation and the start of classes the next day.

At a slower, calmer pace than in years past, nearly 2,900 students will have completed the move-in to campus housing by the end of the weekend, with move-in day appointments the past two years helping make it a nearly seamless transition.

A commercial songwriting major, Triggs, 18, said he’s “ready to move in. This has been my dream school since middle school. It hasn’t sunk in yet, but when I get to my room and I see everything, I think it will kick in. I’m very excited.”

Regarding his major, Triggs “has been doing music since middle school, sixth grade, and I always wanted to get bigger with it. I feel like I’m a good songwriter so I think I can go a long way.” Helping the Crosstown High School graduate move were his mother, Antionette Triggs, father, Daniel Triggs Sr., brother, Demarcus Triggs, and roommate, Christopher Stringer of Memphis.

Tucker, 18, who will be a forensic science major, said MTSU officials have made everything really easy to do (with the move-in). “It’s been easy to find everything here.” She had plenty from other Tuckers — sister Jayde, father Josh, stepmother Samantha and grandmother Susan.

Tucker said she recalls that MTSU “stuck out to me more than other schools. I liked when I toured here. I liked the people that were on tour with me.” She added that she’s always been interested in forensics and hopes to join the Metropolitan Nashville Police Department after graduating.

Wiseman, 17, who will be a computer science major, said he’s “looking forward to earning his degree and starting my career.” In computer science, he “likes building things from scratch with my own skills.” Mom Tanya, dad James and sister Taniya Wiseman aided Elijah’s move-in.

The Durrills — parents Sue and Jeff — assisted daughter Kendall in bringing two carloads of items from Maryland before eventually flying back home and leaving the new MTSU audio production major with the family’s Bronco Sport to attend concerts in Nashville and head home for holidays and school breaks.

University Convocation, the official start to the academic year, will be held starting at 1 p.m. Sunday in Murphy Center and features Andrew Frosthoefel, author of MTSU’s Summer Reading Selection, "Walking to Listen," as guest speaker. Masks are optional.

Forsthoefel will sign copies of his book at the Back to School Bash at 5 p.m. Saturday in the Student Union Commons.

1.) Barfield Elementary Custodians say success is about being kind to others

2.) MTSU Again Ranks at the Top of the List among U.S. Colleges

3.) Potential Sign-on Bonus for Some Nurses are up-to $20,000 at Murfreesboro VA Campus

4.) LaVergne Old Timers Festival will be held This September

5.) Did you know? 4-Proposed amendments to the TN Constitution will be on Nov. 8 Ballot

6.) Apartment Rent is HIGH in Murfreesboro and Surrounding Areas, but not as high as Nashville