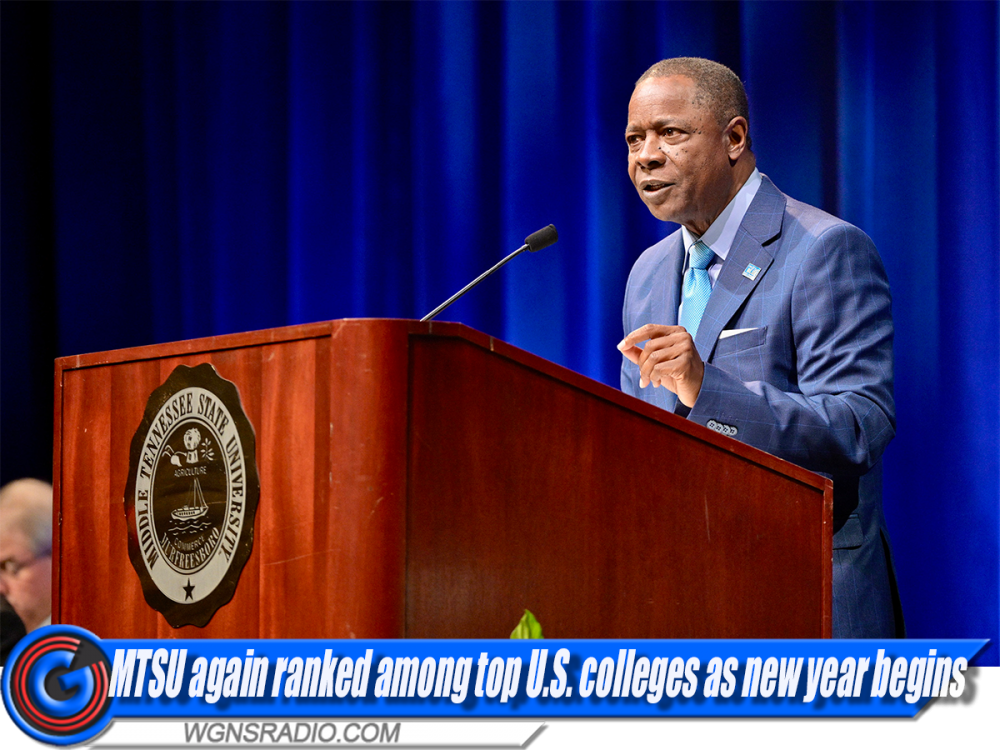 MURFREESBORO, Tenn. — Citing MTSU’s fourth straight ranking at one of the nation’s best colleges, Middle Tennessee State University President Sidney A. McPhee praised the “remarkable” faculty and staff during his State of the University address Thursday for continuing to raise the university’s profile and attract top scholars to pursue their college degrees here.

“We are no longer a best-kept secret, as your hard work and considerable results now routinely attract headlines and attention from across Tennessee, the nation and, often, the world,” McPhee told the hundreds in attendance during his annual address at the traditional Fall Faculty Meeting inside Tucker Theatre.

“We begin this year stronger … and are now back in full swing.”

MTSU returned to The Princeton Review’s annual list of the nation’s best colleges for a fourth consecutive year and remains the only locally governed institution in Tennessee recognized by the publication, first achieving its spot in 2019.

Only five higher education entities in the state — two public and three private — were included in the recently released 31st edition of “The Best 388 Colleges.”

In kicking off the 2022-23 academic year that officially begins Monday, Aug. 22, with the start of classes, McPhee used his 45-minute address Thursday to highlight a number of significant achievements during the past few years, including the university’s elevation to the R2 “high research activity” doctoral university designation by Carnegie Classification of Institutions of Higher Education.

He also noted the launch of new academic programs, such as a bachelor’s degree in Public Writing and Rhetoric, the first of its kind in the state; master’s degrees in data science and supply chain management; and a bachelor’s in cybersecurity that is under consideration.

“These programs further fulfill our strategy of providing educational experiences that correspond to the skills that Tennessee businesses need today and in the future,” said McPhee, the university’s 10th president beginning his 22nd year as its leader.

McPhee noted the ongoing challenges facing higher education but encouraged the hundreds of faculty in attendance to remember the importance of their work.

“We find ourselves affected by economic inflation and a contentious political environment. In all times, but especially in times like these, our mission of promoting education, reasoned debate, and civility is more important than ever,” he said.

“Never be dissuaded about the importance of your work. Without exaggeration, what we do here transforms lives for the better.”

The relocation project, which will take an estimated three to five years, includes construction of an 83,000-square-foot academic building and three hangar structures to serve as laboratory and support spaces in a “world-class aviation academy.”