Early Tuesday Morning Accidents on I-24 in Murfreesboro 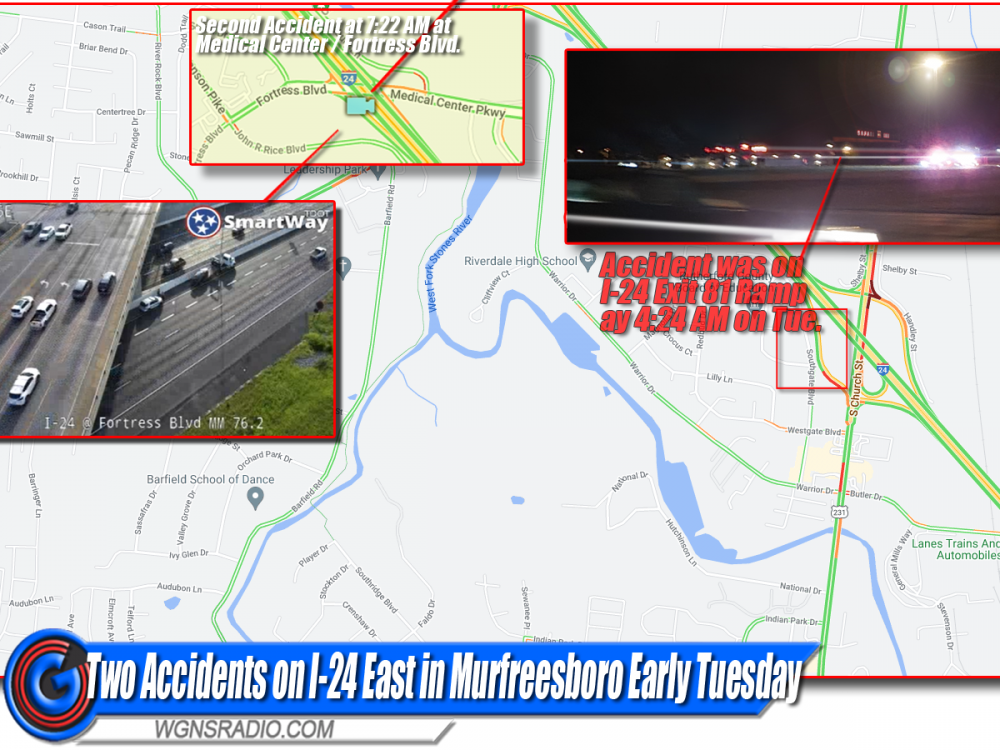 Early Tuesday morning (09/06/22), there was a serious auto accident on the I-24 East off ramp at Exit 81 (South Church Street) in Murfreesboro. Reports indicate that multiple police / fire and rescue agencies were called to the scene. Sgt. Alex Campbell with the Tennessee Highway Patrol confirmed with WGNS NEWS, "THP is investigating a single-vehicle crash at the 81 eastbound exit ramp. The ramp was blocked. There are injuries being reported."

The accident on the I-24 exit ramp at South Church Street occured about 30-minutes before the 5AM hour. Murfreesboro Police Public Information Officer Larry Flowers told WGNS that Fire & Rescue responded to the scene at 4:24 Tuesday morning. State Troopers were at the wreck site for at least two-hours and are leading the investigation into the crash.

23-Year-old Chelsea L. Griffin from Paris, Tennessee was driving her Nissan Sentra on I-24 East near the South Church Street interchange. Griffin struck the median wall and then traveled off the right side of the roadway. After hitting the dividing wall at the exit and running off the road, her car came to a rest on the left shoulder of the ramp.  Tuesday’s preliminary report from the THP confirmed she was not wearing a seatbelt and was seriously injured in the accident, but the extent of those injuries are not known at this time. Troopers confirmed her vehicle was the only car involved in the accident.

Later Tuesday morning, another wreck was reported just before 7:30 AM on Interstate 24 Eastbound at mile marker 76. The incident occurred near the Medical Center Parkway / I-24 interchange.  As a result, the Tennessee Department of Transportation confirmed the I-24 Eastbound outer left lane was blocked to oncoming traffic.