After 1 Collapsed Lung and Two Weeks in the NICU, Murfreesboro Baby is Home 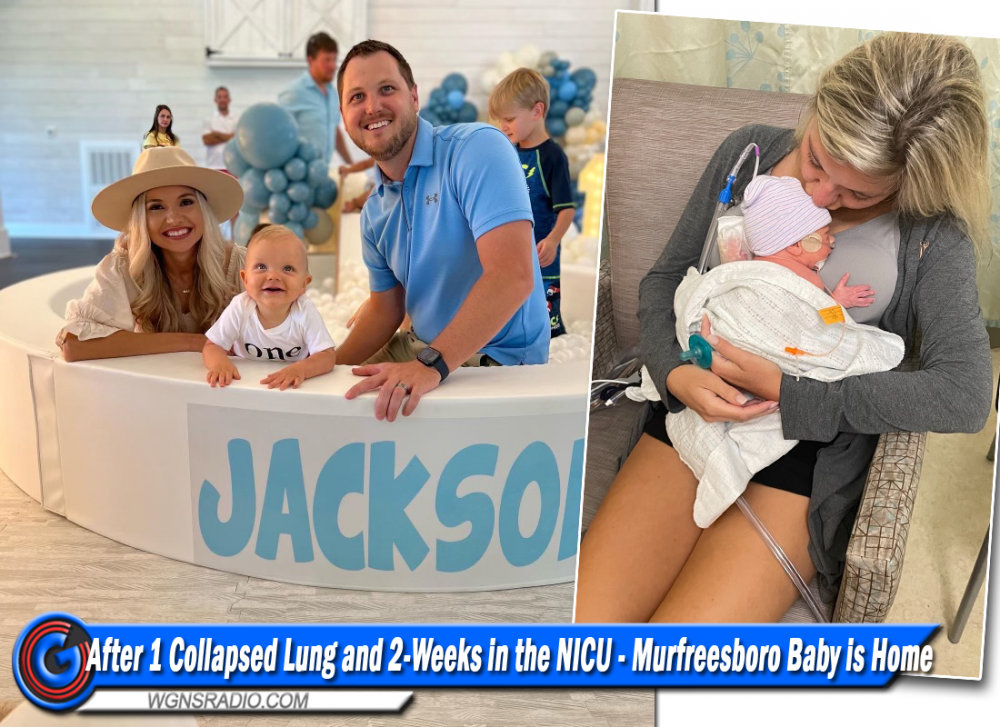 RUTHERFORD COUNTY, TN - It was a day of celebration and love for Kara Forge, who was 33 weeks pregnant. Kara’s family gathered together to throw her a shower for her soon-to-be son. Little did they know, he would be arriving just hours later. That evening, she was getting ready for bed and noticed she was bleeding.

Kara is a part-time postpartum nurse at Ascension Saint Thomas Rutherford, so she knew this wasn’t a good sign. “My husband and I went straight to Ascension Saint Thomas Rutherford Emergency Department,” Kara recalls. “When I got to the hospital, they set me up in a room and were monitoring the baby’s heartbeat, so we knew he was okay.” Although Kara couldn’t feel it, she was contracting about every minute. They decided to put her on a magnesium drip for a couple of hours, which is a way to slow down contractions.

They also performed an ultrasound to make sure she didn't have a uterine abruption, and everything looked normal. “Within a couple of hours, my contractions kept increasing, getting stronger, and happening more frequently,” said Kara. “Every time I moved in the bed, I lost a lot of blood. My OB came in and decided to have an emergency c-section.” With the combination of Kara’s anesthesia and blood loss, she developed a very low blood pressure of 66/33. “It was just a really scary moment,” said Kara.

On June 21, 2022, Jackson Forge was born at 4 pounds and 11 ounces. “Due to him being seven weeks early, they realized he had one collapsed lung and immediately was put on oxygen,” said Kara. Jackson was on a ventilator for 24 hours to help build strength back up in his lungs.

Within that 24 hours, Kara was also up and moving around, motivated to see her son. “You just don’t think about yourself in those situations,” said Kara. “I wanted to see my baby and be with him.” Because Kara and her husband couldn’t be in the NICU all the time, they were able to watch Jackson through the NICview cameras, generously donated by the Ascension Saint Thomas Rutherford Foundation. The cameras allowed Kara, her husband, family, and friends to check on Jackson and see him growing and getting stronger.

“We had the best care possible, just constant love and support,” said Kara. “I’ve always thought God puts you right where you need to be, and I know there is a reason I accepted a job at Ascension Saint Thomas Rutherford. Who would have thought eight years later it would be my coworkers that saved my life and my sons.”

Jackson was released 13 days later, on July 4th. Jackson is meeting all of his milestones,” said Kara. “We are on track and exactly where we need to be.”