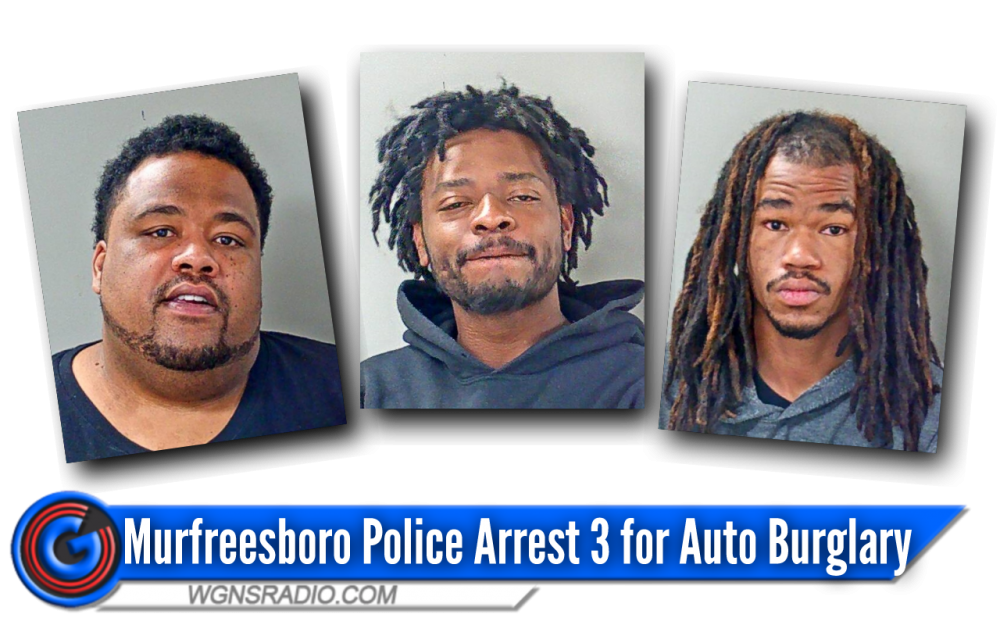 MURFREESBORO, Tenn. – Murfreesboro Police Department officers arrest three men who were reportedly breaking into cars in the Rocky Lane area Sunday, Oct. 9. Two of the men were armed with guns and one of them was also in possession of illegal drugs.

An officer saw the three males dressed in dark clothing, all with backpacks, and a large trash bag full of items, rummaging through a gold Ford F-150 pickup at the North Campus Apartments at 5:24 Sunday morning. One of the men took off running and two remained at the scene.

Another responding officer located the man, later identified as Keontae McGowan, 23, at the Nottingham Apartments on Gunnerson Ave. The officer chased the man on foot and noticed what appeared to be a gun in his hand. The officer gave commands to stop running and to drop the object. A 9mm handgun with an extended magazine was on the ground next to McGowan when he was taken into custody. McGowan is charged with burglary to a motor vehicle, possession of a firearm while in the commission of a felony, evading arrest, violation of an order of protection, and an outstanding warrant for domestic assault.

The other two men are identified as Brantouris Glenn, 33, and Edrick Brooks, 31. Brooks attempted to place his hand in his pocket twice while officers tried to pat him down. Officers found a 9mm handgun and a magazine in his pocket. Three bags containing crack and powder cocaine fell out of his pocket. More crack cocaine and a marijuana cigarette were found on Brooks as he was booked into jail. Brooks is charged with auto burglary, felony possession and simple possession of a Schedule II drug, resisting arrest, and possession of a firearm while committing a dangerous felony. He also had two outstanding warrants for domestic assault and vandalism. Glenn arrested the next day on a Failure to appear warrant. Additional charges are pending.