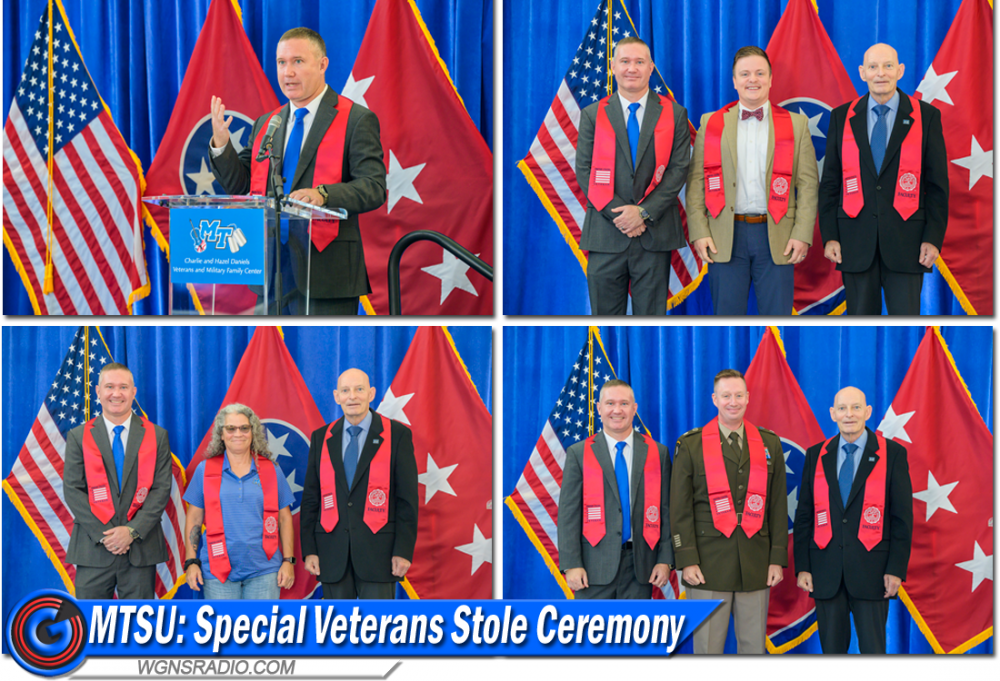 MURFREESBORO, Tenn. — It was an intimate but touching setting inside the Miller Education Center’s second floor atrium as the Charlie and Hazel Daniels Veterans and Military Family Center again recognized military veterans and active-duty employees working on campus with the MTSU Faculty/Staff Veterans Stole Ceremony.

Faculty members Lt. Col. Arlin Wilsher, professor in the Department of Military Science, Jamie Teachenor, adjunct professor of songwriting in the Recording Industry Department, and staff member Betty Miller from the University Post Office were honored Nov. 9 for their respective service by being presented with special red stoles to be worn during commencement ceremonies and other campus events.

Wilsher, who arrived on campus in August and has 24 years and counting as a U.S. Army aviator, said he’s been impressed by the comprehensive support that the university provides veterans through the Daniels Center and how the center “goes out of its way” to reach out to veterans, both students and nonstudents.

“I didn’t recognize how much MTSU does to recognize veterans, both currently serving and those who served many years ago, to make sure that they’re supported through both the students … but also the faculty and staff as well,” he said. “It’s impressive that it takes the time to recognize all these people who have moved on to new jobs … and ensuring that they get the support they need, should they need support, that they may not even be aware of.” “It’s one of the greatest things I’ve seen, having served in multiple places around the country.”

In addition to being recognized as a faculty veteran, Teachenor, an Air Force veteran who served as a vocalist in the Air Force band, also sung the national anthem at the start of the stole ceremony.  He too applauded MTSU’s efforts to support veterans, including “doing such a great job of making the veteran community feel like its own community or entity but then also a part of that big family of MTSU. … They make everyone feel welcome.”

Teachenor has gained notoriety in recent months as the songwriter for “Semper Supra,” the anthem for the U.S. Space Force, the newest military branch created in 2019 as an offshoot of the Air Force. Teachenor represented Space Force at halftime of the Nov. 12 Salute to Veterans and Armed Forces game at Floyd Stadium, where the Band of Blue played the new anthem.

“I’m excited as I can be,” Teachenor said in advance of the band’s performance. “The song is no longer mine, it’s Space Force’s … but truly it’s such an honor that I not only get to be an adjunct here, but that my worlds kind of collided in a very beautiful fashion.”

Miller meanwhile worked in telecommunications infrastructure in the U.S. Army Reserve in Nashville in the early 1980s, where “my sole job for the entire year was to keep communications going,” she said, adding that part of her responsibility was “learning how to drive those big deuce-and-a-halves,” a reference to the 2.5-ton cargo trucks used by the Army. For Miller, who handles passports and other duties within the post office, the fact that the university holds such a ceremony “makes me proud. It really makes me proud.”

Commit to serve campus, community - Keynote speaker and U.S. Army veteran Lee Wade, interim associate dean of the College of Behavioral and Health Sciences, encouraged all attendees to continue looking for ways to serve the university and their communities.

Wade shared the story of baseball pitcher Steve Wright who passed up a promising baseball career to serve in the military, then shared a story of his own time in basic training where he and other soldiers stopped during a low-crawl exercise to help a fellow soldier who was struggling to complete the task.

“There’s a saying that many hands make light work for others,” he said. “We can all commit to that here and in our community at MTSU and in the city by just small acts of service and committing a few hours here and there.”

Retired Lt. Gen. Keith M. Huber, senior adviser for veterans and leadership initiatives at MTSU, asked those in attendance to continue to be his advocate when they come into contact with veterans on campus and make sure they’re aware of the Daniels Center and Veterans Administration resources available to the 1,000 student veterans and their families on campus.

“This institution knows that Veterans Day is every day, and that the freedoms we enjoy and often take for granted are provided to us by our veterans and the sacrifices of their families,” Huber said.

Hilary Miller, director of the Daniels Center, said she encourages faculty and staff to wear their stoles “proudly” at various events around campus, not just at commencement ceremonies. The inaugural faculty/staff ceremony was held in fall 2019.

Wilsher said the faculty/staff ceremony along with the graduating veterans stole ceremony for students each semester provide a visible incentive for the students he’s currently teaching who will one day be veterans themselves.

“It helps them to see that the country appreciates what they do,” he said. “You can see that there are places that go out of their way to recognize your service, and to make sure that you’re getting the support you need to continue that service, whether you’re still serving or have moved on to do something afterward.”