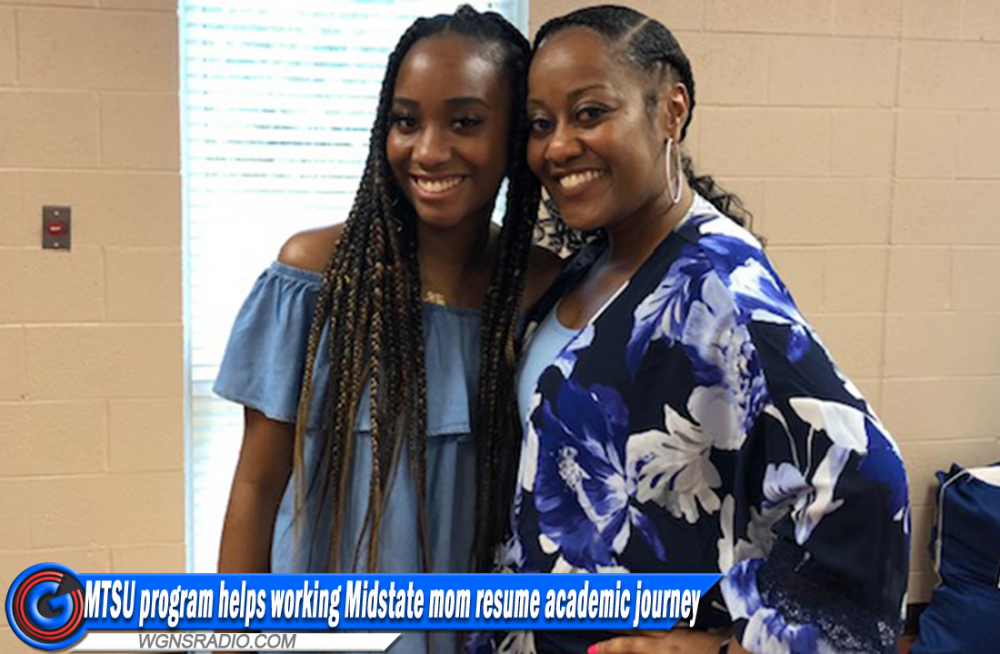 MTSU graduating senior Michelle Zeigler, right, of Antioch, Tennessee, poses with her daughter, McKensey, who will soon graduate from a Memphis university. Zeigler, 46, returned to school to earn an Integrated Studies degree through University College after pausing her academic pursuits in the early 90s. (Submitted photo)

MURFREESBORO, Tenn. — In less than a month, Michelle Zeigler of Antioch, Tennessee, will walk across the stage in Murphy Center and accept her diploma from Middle Tennessee State University. That’s four days before her daughter, McKensey, will walk across a similar stage in Memphis to accept hers. It’s a goal that Michelle set for herself when she enrolled at MTSU back in 2021.

And when she makes that walk, she will be doing it in a very special pair of silver shoes she bought to commemorate her achievement.

Zeigler, now 46, started college in the early 90s at Tennessee State University. Similar to so many other students, “life happened,” Zeigler said, and she paused her academy journey at TSU with about 90 hours completed.

After settling down with “the man I was supposed to marry,” husband Belford, Zeigler refocused and considered going back to school to finish her degree. She looked into Strayer University but was told that all the work she had done when she was younger would not transfer.

“That set me back mentally,” Zeigler said. “I was not prepared to start from scratch because I had worked hard back then even if I didn’t finish.”

Then, early on in 2021, she saw a post on her neighborhood’s Facebook page about a “Finish Your Degree” event hosted by MTSU’s University College. A woman of faith, Zeigler said that God had told her for years to finish what she had started. She took that Facebook post as a sign and decided to attend.

“I was relieved that the people at the event almost knew my story before I told them,” she said.

Because she chose the Integrated Studies degree, Zeigler’s prior credits transferred almost seamlessly and she only had to take one class before enrolling in the Applied Leadership program, an area of study built for adults looking to finish their degree. In that program, students also earn certificates after three of the courses.

Zeigler said the classes were difficult, but she was relieved to not be the only adult in the classroom.

“We all have taken ownership over our learning, and it really shows in the discussions and the quality of work we are all doing,” she said. “This time it is on my dime, and it’s been an entirely different experience going back to school as an adult. It’s wonderful.”

Zeigler said that coming back to school at MTSU has reignited her passion to grow in her career at McKesson Specialty Health in LaVergne. The skills she is learning and the experiences she is having are pushing her to new levels, she said.

“For one of my projects, I interviewed my company’s office of diversity, equity, and inclusion,” she said. “After that, I can see myself moving into a similar role, and before MTSU I am not sure I would have had the confidence to say something like that.”

Zeigler said the only thing she wishes MTSU could have done differently was “find me 10 years earlier.”

“MTSU has helped me uncover what I am capable of, and I am doing things with my career that I never expected,” she said. “I used to be the most fearful presenter ever and through all of this, I have learned and studied and practiced. It has been a game changer with my performance at my job and has made me realize I am not done. I am not finished learning.”

Because she has realized her potential, Zeigler is considering starting the Master of Professional Studies degree at MTSU. She believes, along with the certificates she’s earned in her current program, that a master’s degree from MTSU will take her to the next level of her career.

Graduation is Dec. 10 at the Murphy Center. If you’re there or watch the livestream, listen for Michelle’s full name, Tanya Michelle Maxwell Zeigler. She made a special request that she be able to add her maiden name since her parents helped start her journey to a degree.

Oh, and be on the lookout for those silver shoes, too.

“This is my time,” she said. “Everyone has been so supportive. I have received so many positive reactions and messages about learning more about the program and MTSU.

“This is the best decision I’ve made since marrying my husband.”

If you are interested in coming back to college and finishing your degree, you can visit MTSU.edu/finishnow or give University College a call at 615-494-7714.