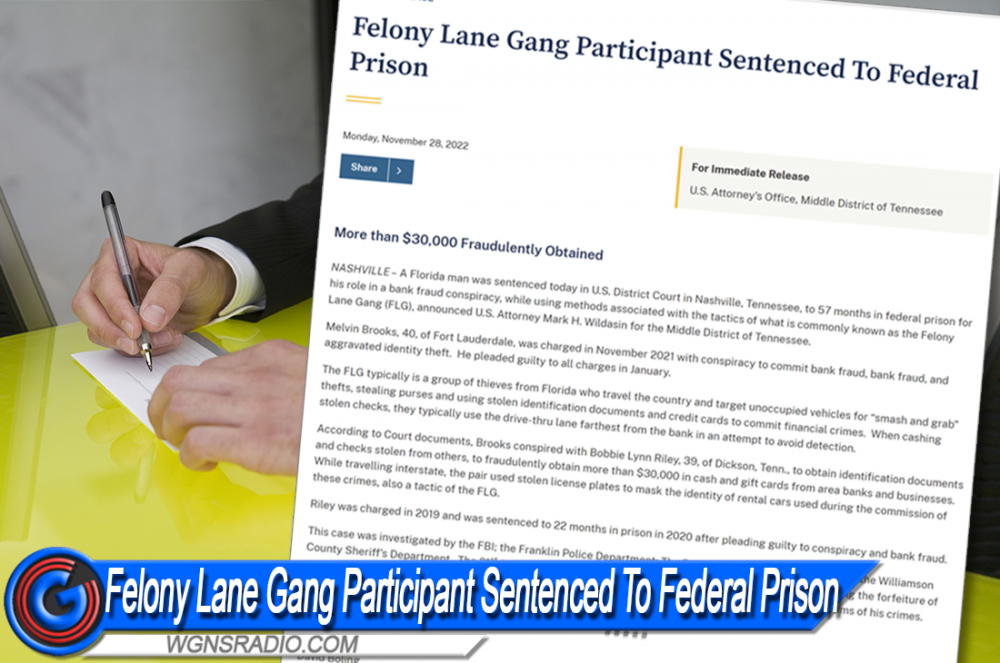 More news on the Felony Lane Gang, which is a gang that has been mentioned in past media releases by the Murfreesboro Police Department. The most recent report from the MPD involved a woman who allegedly used a stolen I-D to cash a check at Wilson Bank & Trust in Murfreesboro… a check that was reportedly stolen.

Ironically, 3-days after the check fraud case in Murfreesboro occurred, an alleged Felony Lane Gang participant was sentenced to Federal Prison in Nashville. There, a Florida man was sentenced in U.S. District Court in Nashville, Tennessee on January 28th, to 57 months in federal prison for his role in a bank fraud conspiracy, while using methods associated with the tactics of what is commonly known as the Felony Lane Gang (FLG), announced U.S. Attorney Mark H. Wildasin for the Middle District of Tennessee.

40-Year-old Melvin Brooks of Fort Lauderdale, was charged in November of 2021 with conspiracy to commit bank fraud, aggravated identity theft and bank fraud.  Prior to the sentencing this past month, Brooks pleaded guilty to all charges in January of 2022.

The FLG typically is a group of thieves from Florida who travel the country and target unoccupied vehicles for “smash and grab” thefts, stealing purses and using stolen identification documents and credit cards to commit financial crimes, similar to what was reported in Murfreesboro in November.  When cashing stolen checks, they typically use the drive-thru lane farthest from the bank in an attempt to avoid detection.

According to Court documents in the recent conviction and sentencing, Brooks conspired with 39-year-old Bobbie Lynn Riley of Dickson, Tenn., to obtain identification documents and checks stolen from others, to fraudulently obtain more than $30,000 in cash and gift cards from area banks and businesses.  While travelling interstate, the pair used stolen license plates to mask the identity of rental cars used during the commission of these crimes, also a tactic of the FLG.

Riley was charged in 2019 and was sentenced to 22 months in prison in 2020, after pleading guilty to conspiracy and bank fraud.

This case was investigated by the FBI; the Franklin Police Department; The Brentwood Police Department; and the Williamson County Sheriff’s Department.  The 21st Judicial District Attorney General’s Office was instrumental in obtaining the forfeiture of more than $29,000 which was seized from Brooks upon his arrest and will be used as restitution to the victims of his crimes.  Assistant U.S. Attorney Taylor J. Phillips is prosecuting the case.