(NASHVILLE) A Smyrna teenager was killed in a single-vehicle crash at 10:15AM Saturday (3/6/2021) morning. It happened on a rural two-lane section of Old Charlotte Pike (off of Charlotte Pike, which is Highway 70) in the 7600 block, near Bellevue.

Metro Police report that 18-year old Austin Dubois of Pegram was driving the vehicle. As he neared a curve in the 2004 Pontiac GTO, he lost control and the vehicle left off the roadway and the passenger side slammed into a telephone pole. Neither of the teens were wearing safety belts.

Metro Police believe that speed may have been a factor in the fatal crash. 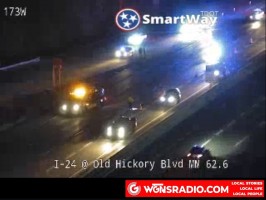