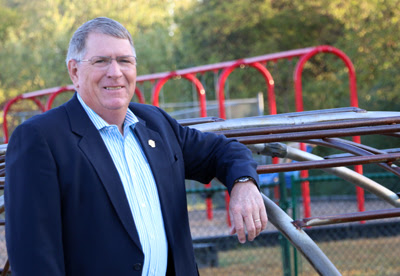 Terry Hodge lives less than a mile from the house where he grew up.

All these years later, he may not have gone very far but the neighborhood doesn't look anything like it once did.

He and his wife Linda built their home in 1995. It's catty-corner behind the Middle Tennessee State University campus just off Greenland Drive on the backside of Scotland Acres.

That area of Murfreesboro wasn't developed until around 1990. So while growing up in the 1960s, when Hodge and his friends weren't playing sports, they were oftentimes messing around in large open fields. Like Hodge, there are a number of kids who grew up there in the 60s and 70s who have since moved back.

Every morning when he leaves his house, driving through Scotland Acres is a reminder of those days gone by and just how much the city he's called home his entire life has changed.

"Going down the road every now and then I'll look out behind Reeves Rogers (Elementary) School," Hodge said, "that's where we used to play all the time.

The Murfreesboro that Hodge grew up in is much different than the city he lives in today.

According to the Census Bureau, the population in 1960 was a mere 18,991 people compared to the 2014 estimate of 120,954 people. That's more than six times the amount of people in his lifetime who have moved to Hodge's hometown.

"It was a whole lot smaller," Hodge recalled. "I've seen the growth over the years."

On any given morning while having breakfast at Sylvan Park Restaurant, where he's a regular customer and knows the waitresses. Hodge is also likely to know someone sitting at every table.

However, by comparison, today it doesn't feel like as many as it once was.

"We go to World Outreach Church and I can walk from one end to the other," Hodge said, "and probably know just a handful of people. So I found out right quick I don't know a whole lot."

Hodge attended Reeves Rogers and then went on to Bradley Middle School, which is now a Murfreesboro City school, and then was among the first students to attend Oakland High School.

He was not unlike most boys.

He played football and baseball, and, of course, for a boy who had no desire to leave town, he met his future wife.

"Seems like we went out a time or two in high school," Hodge recalled, "and then in college off and on. Then it took off from there."

Terry and Linda both graduated from Oakland, where Linda currently works in the front office as the school secretary, and they both attended MTSU.

Hodge graduated in 1979 and was already working for his father.

His father started a wheel weight manufacturing business in 1975, and Hodge said he had a great relationship with his parents, Don and Connie. So despite other opportunities, Terry and his dad became business partners.

"I didn't have any desire to go anywhere else," said Hodge, who's always been and remains comfortable in Murfreesboro.

Father and son were partners until Don passed away in 1995.

The business was originally located in the building that is currently home to Mayday Brewery on Old Salem Road, but Terry sold the building and moved the operation to nearby Woodbury in 2000. In 2004, he sold it to a competitor out of Delaware after 29 years in business.

At the time of the sale, Hodge said the wheel weight industry was moving from lead weights -- which were eventually deemed hazardous and banned -- to zinc and steel.

He then went from manufacturing to home repairs.

Hodge said manufacturing was a whole lot harder mentally when "you're in charge of everything" versus home repairs being "physically harder."

Nowadays he changes out a lot of doors and windows and does repairs for a local property management company. He works six days a week from 7 a.m. until about 5 p.m.

"That's the way I always am," he added. "The days with the School Board, that cuts it a little bit short, but it's worthwhile."

Hodge has always been active in the community -- he was a member of the Rotary Club for more than 25 years and ran the softball program for the Kiwanis Club - and has been a School Board member for a little more than 12 years now.

His reason for being involved with the School board is quite simple.

It's a classic story of if you truly want to affect change then get involved.

Hodge, whose children Drew and Ashley (Hodge Rooker) attended Oakland like their parents, was a member of the booster club. His daughter was a freshman softball player and he made a call to a School Board member representing his zone.

He said the call was about a Title IX concern.

Oakland was opened in 1972 and the softball field didn't have lights, whereas new schools were being built and sports facilities were commonly included in the construction phase. Hodge wanted to ask about the possibility of having lights added to the Oakland field.

As with speakers at a board meeting, Hodge was given just three minutes on the phone, he said.

Coincidentally, the night the Oakland boosters spoke at a board meeting and were originally denied the budget to provide lights for the softball field, the same board approved a softball field with lights for Eagleville School, Hodge added.

"I just didn't like the way I was treated," he said, "and I wasn't really getting a whole lot out of the board member, as far as representation goes ... so I got involved with it. It's a great big business is what it is."

And running a successful business is Hodge's strong suit.

He started following School Board issues more closely in the local newspaper.

The year he was elected to the board, 2004, Hodge was one of four newly elected members and the only one of those four who remains on the board. In those early years, he valued the opinions of fellow board members Rick Wise, Gary Patton and Dorris Jernigan Sr.

Like the population, RCS enrollment figures have nearly doubled during Hodge's 12 years on the board.

Among various issues -- some of which have been controversial and others that are more straightforward -- and annual budgets, the School Board has been tasked with building eight schools - Stewarts Creek Middle, Stewarts Creek Elementary, LaVergne Lake Elementary, Rockvale Middle, Brown's Chapel Elementary, Oakland Middle, Whitworth-Buchanan Middle and Stewarts Creek High School - since Hodge was elected, they've added onto 10 other schools -- including a pair of additions to Eagleville -- and also renovated and modified others.

"At times I don't feel the citizens realize how well we have it," said Hodge, when talking about how the board and Rutherford County Commission have kept up with sweeping increases in enrollment.

"The growth is the biggest thing we're dealing with. Just trying to stay ahead, which we're making headway, progress, but we're still getting behind. We can't build it fast enough."

While Hodge values the opinions of Chairman Jeff Jordan and Vice Chairman Jim Estes, two former teachers in RCS, when it comes to educational issues, he relies on his own experiences in terms of running a business.

Prior to joining the board, Hodge had dealt with everything from hiring personnel and large scale health insurance plans to workman's compensation and legal issues.

He sees the primary role of the board as a means of providing students with whatever they need to be successful. It's about education first and - yes - they need to try and take care of taxpayers too. Hodge added, "I can't be concerned with whether or not (the County Commission) is going to fund it or not. My job is, we need it then push for it."

He also sees students as the main asset of any school district.

"It's our job to make sure we send them out prepared," said Hodge, who agreed the work that's been done for the past decade and what they do over the course of the next decade will serve RCS as the foundation for years and years to come.

However, the challenge lies in the fact that projections indicate hundreds of thousands of people are still expected to move to Middle Tennessee during the next decade.

Hodge, whose mother passed away shortly before he was elected to the board, said it's everyone's duty to give back to the community.

"I try to sit back and listen," Hodge said. "You can learn a whole lot more listening than you can talking. I try to do that mostly but if I see something that needs to be said, I'm going to say it.

"I've enjoyed it. It's had its ups and downs.

"I don't lose a lot of sleep," he continued, "but there have been some nights you're sitting there making decisions and you wonder if you made the right decision or not. It's a business and I enjoy business."