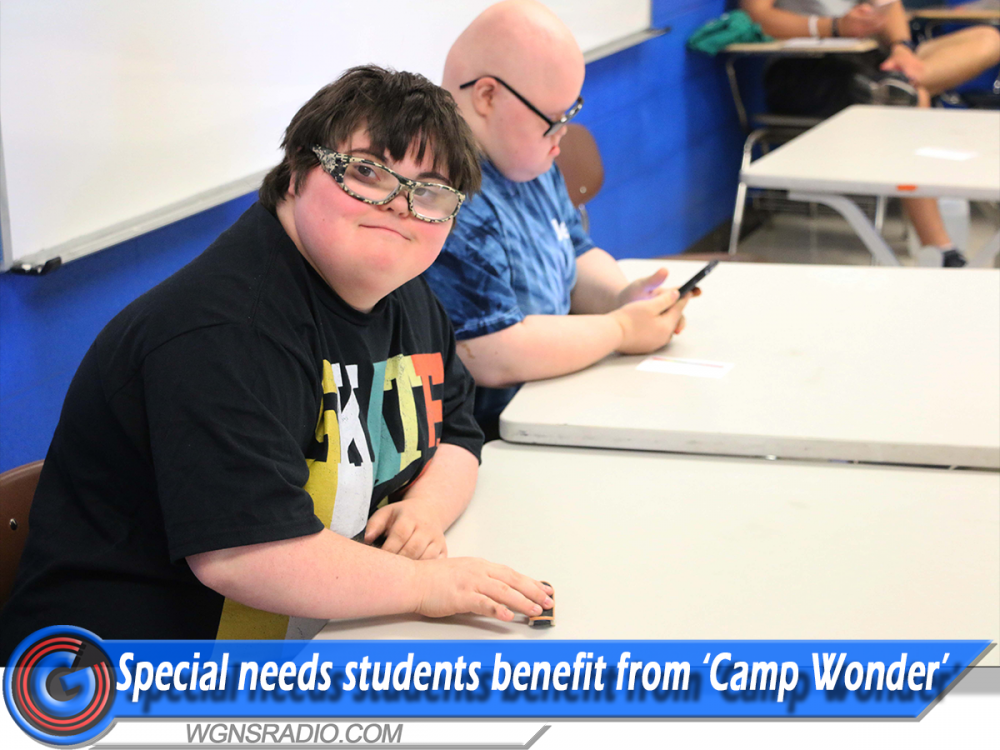 Although they may be twins, Lauren and Diana couldn’t have more polarizing interests.

Lauren rocks skateboarding shirts and has a tech deck — otherwise known as a mini skateboard — between her fingers most of the time. She likes doing tricks on her desk in-between learning activities.

“I make music,” Lauren says. “I have a harmonica at home. A trumpet. A piano.”  Her sister, Diana, is more concerned with the latest hype in fashion and social media. She works at Kroger and enjoys making shirts for famous YouTubers.  At one point during a break, she pulls out her phone and launches YouTube. “Keeping up with the Kardashians. I haven’t missed an episode,” Diana says.

Lauren and Diana are attending this year’s Camp Wonder, a summer camp hosted at LaVergne High School. The camp is open to all special education students across Rutherford County.

The camp is a partnership between Rutherford County Schools and The Discovery Center, a children’s museum, nature center and wetlands boardwalk near downtown Murfreesboro. It offers various activities for kids and their parents, and teaching at Camp Wonder is just one avenue in which the Discovery Center shows its compassion for the local community.

As part of the camp, Discovery Center leaders help guide students through multiple activities.  For one activity, for example, the campers create a photo frame by first painting a rock, stringing colored beads on a copper wire, and finally having their photo taken. Later, the wire will be wrapped around the rock and the students will take home the craft project as a keepsake.  What is ‘wonderful’ about Camp Wonder is how much students are learning.

Claire Maxwell, an RCS School Board member, is the heart behind Camp Wonder “I was an EA at Riverdale High School,” says Maxwell. “I realized that for some of our kids, their parents didn’t know what was out there, and a lot of the students hadn’t been to camp.”

After meeting with Tara MacDougall, president and CEO at Discovery Center, Maxwell and MacDougall talked for a few months and created a plan for the first ever Camp Wonder, starting with students at Riverdale four years ago.

When Maxwell became a School Board member and left her job at Riverdale, she was committed to maintaining the camp. She hosted it at Riverdale last summer, and then planned to move it to other schools around the county.

In addition to the camp at LaVergne High this week, she has another week planned for Oakland High in July.  The cost to families is only $25. “I print up about 5 to 10 applications every year, and I go physically to all the schools,” Maxwell says.  “I’d like to grow it. I’d like to have more than two (sessions).”

Lauren, Diana and the 10 other students in attendance for the LaVergne High session are all gaining something which has been hard to come by in recent years — socialization and fun. Camp Wonder is as much about learning and gaining new academic skills as it is about having a good time and meeting new friends from across the school system — people they may not see in a normal school year.

During the interview for this story, Maxwell assists as Lauren and Diana craft kazoos out of two popsicle sticks, straws and rubber bands.  Lauren finishes hers first and presses it to her lips to try it out.  “What do you like most about coming to camp?” Maxwell asks. “Fun. It’s fun,” Lauren says. She blows her kazoo.

Other WGNS News Stories: 1.) US Marshals Make Arrests In Shelbyville 2.) Average Monthly Household Cost of Bills in Murfreesboro, Smyrna, LaVergne, Tennessee 3.) Rutherford County records a 3.3% Divorce Rate in 2020 and 3.7% Divorce Rate in 2019 4.) Murfreesboro Woman Talks About Becoming a Black Belt in Taekwondo at age 74 5.) Home on Cutoff Road in Walter Hill Destroyed by Fire on Tuesday