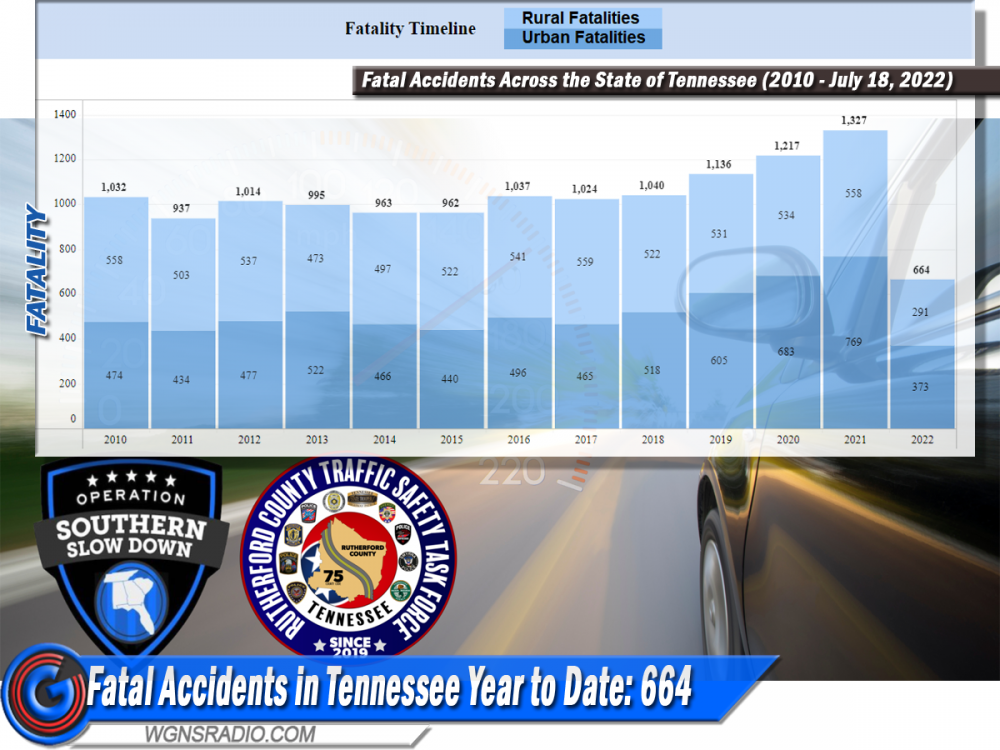 “In addition, we have received several complaints of speeding and drag racing in the same area,” said Lt. Greg Walker. That’s why task force members from the Tennessee Highway Patrol, Rutherford County Sheriff’s Office and Murfreesboro Police Department will be in the area of Highway 99 on Monday during their pre-planned traffic enforcement day. Additional officers will be between Warrior Drive and Rockvale Elementary School.

July 18 - July 24: The additional patrol on Highway 99 will continue throughout the week in other areas of Rutherford County, under “Operation Southern Slowdown,” a speed enforcement and education campaign throughout Tennessee. The goal is to prevent an increase in the number of fatal wrecks. Year to date (07/18/22), there have been 664 fatal accidents on Tennessee roadways. Lt. Bill Miller with the Tennessee Highway Patrol highlighted some of this years statistics in the Volunteer State…The total number of accidents that involved a death or a serious injury in Tennessee between January 1st and July 18, 2022, added up to 3,276 crashes.

So far this year, there have been 16 fatal motor vehicle accidents in Rutherford County. Of that number, two involved a motorcycle and two accident victims were listed as pedestrians. One of 16-killed in Rutherford County were in a collision involving a semi-truck.

The heightened patrol will take place now through July 24th. The special operation will also be a focus for State Troopers in Alabama, Florida, Georgia, and South Carolina.

3.) Gas Prices are Down .17-Cents for the Week of July 18th in Rutherford County