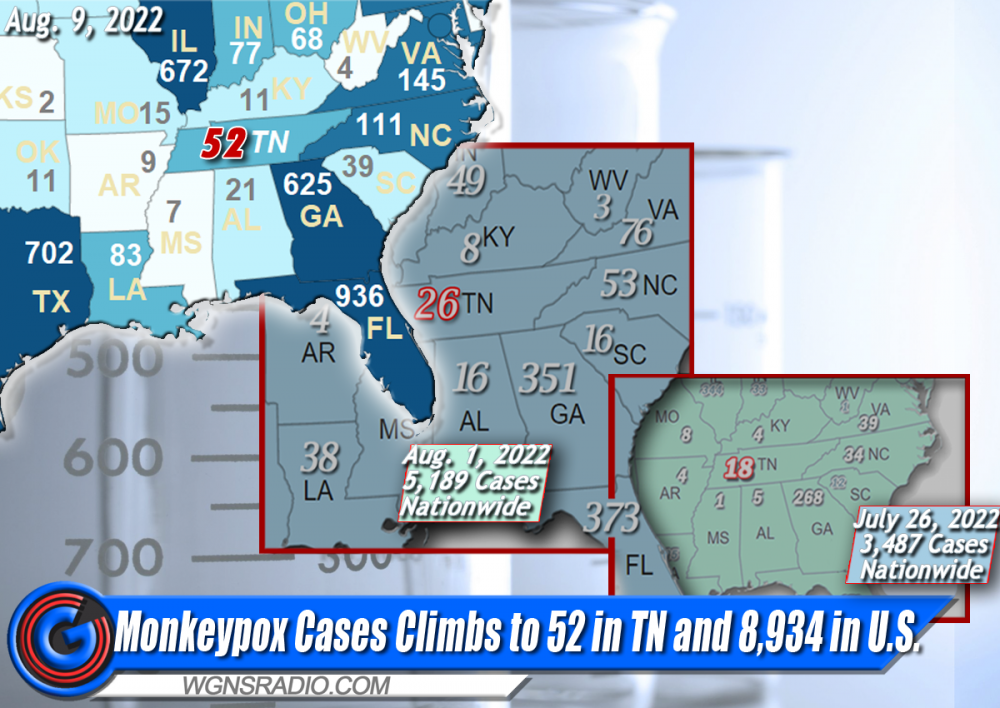 There are now 944 confirmed cases in the states that neighbor Tennessee, which is 424 more than what were reported 8-days prior. The CDC reports Georgia and Florida have the highest number of cases in the south / southeast, with a combined count of 1,151 monkeypox cases. Out of the states that border the Volunteer State, Mississippi has the fewest cases at 7, as of Tuesday morning at (08/09/22).

There is a limited supply of the monkeypox vaccine in Tennessee, where the Department of Health says they are offering the vaccine to those who have had known contact with anyone infected by the virus. Presumed contacts who meet certain criteria are also eligible to receive the vaccine in the Volunteer State. Learn more details about the Monkeypox Vaccine in Tennessee HERE.

According to the Tennessee Department of Health, Monkeypox is a rare but potentially serious viral illness. Although infection may begin with fever, headache, muscle aches, and exhaustion before the development of rash, many of the cases associated with the 2022 outbreak have reported very mild or no symptoms other than rash. In some cases, rash and lesions have been limited to the genitourinary area. The characteristic lesions are deep-seated, vesicular or pustular with a centrifugal distribution; the lesions are well circumscribed and often umbilicate or become confluent, progressing over time to scabs. The rash can be disseminated. The illness typically lasts for 2-4 weeks.

8.) Local Non-Profit to Welcome Ryan Campbell as Guest Speaker – He went on a World Expedition and Survived Plane Crash

9.) Young student receives special police escort to school, upon her first day to class after the death of her father, a LaVergne Police Detective