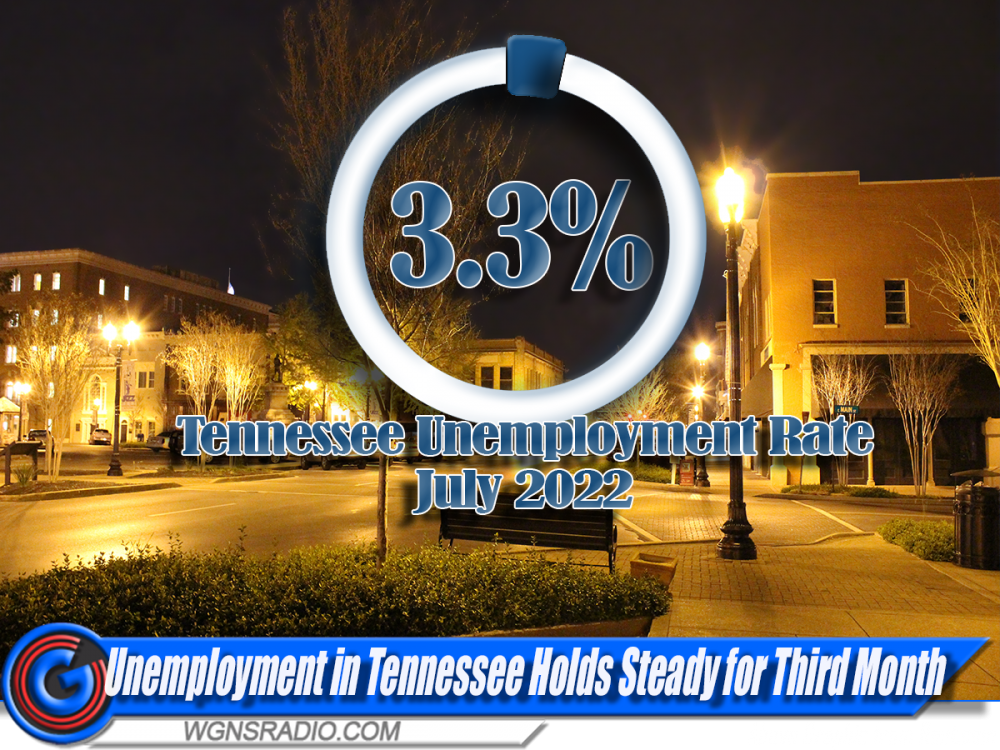 RUTHERFORD COUNTY, Tenn. — Tennessee’s seasonally adjusted statewide unemployment rate remained unchanged for July of 2022, according to newly released data from the Department of Labor and Workforce Development (TDLWD). For the third consecutive month, the rate has held steady at 3.3%.


ADVERTISEMENT
The state’s July rate is just 0.1 of a percentage point higher than the all-time low unemployment rate of 3.2% which was recorded in both March and April of this year.

Between July 2021 and July 2022, Tennessee employers added 110,000 new nonfarm jobs to their payrolls. The leisure and hospitality sector saw the biggest year-to-year gains. The trade, transportation, and utilities sector and the mining, logging, and construction sector saw the next highest employment increases.

In a month-to-month comparison, there were 12,400 fewer nonfarm jobs across the state in July. The local government sector accounted for the largest number of jobs lost, followed by the durable goods manufacturing sector and the mining and logging sector.

Previous Unemployment Breakdown for June 2022: Unemployment numbers for individual counties and cities will be released for the month of July by the end of August. The most recent jobless numbers for each county and city throughout the state were for the month of June, which showed Rutherford County was ranked at number 7 in the top ten list of counties with the lowest unemployment rates in Tennessee. Rutherford was tied with Hickman and Robertson Counties with a 3.4%-jobless rate. In Rutherford County, Smyrna had the lowest unemployment figures at 3.2%, followed by LaVergne at 3.3%. Murfreesboro had a jobless rate of 3.5% in June.

More on July Unemployment: For the month of July, Tennessee’s seasonally adjusted civilian workforce contracted slightly, down 0.1% to 3,409,628 people. That 2022 figure still came in 2.3% higher than the number of individuals working across the state during the month last year.

Nationally, seasonally adjusted unemployment dropped slightly between June and July, down 0.1 of a percentage point to 3.5%.

While the state’s unemployment rate remains low, there are still many Tennesseans searching for meaningful employment. Employers have tens of thousands of jobs they need to fill. TDLWD has the resources available to match job seekers with companies that are hiring. The journey to better employment starts at TNWorkReady.com.