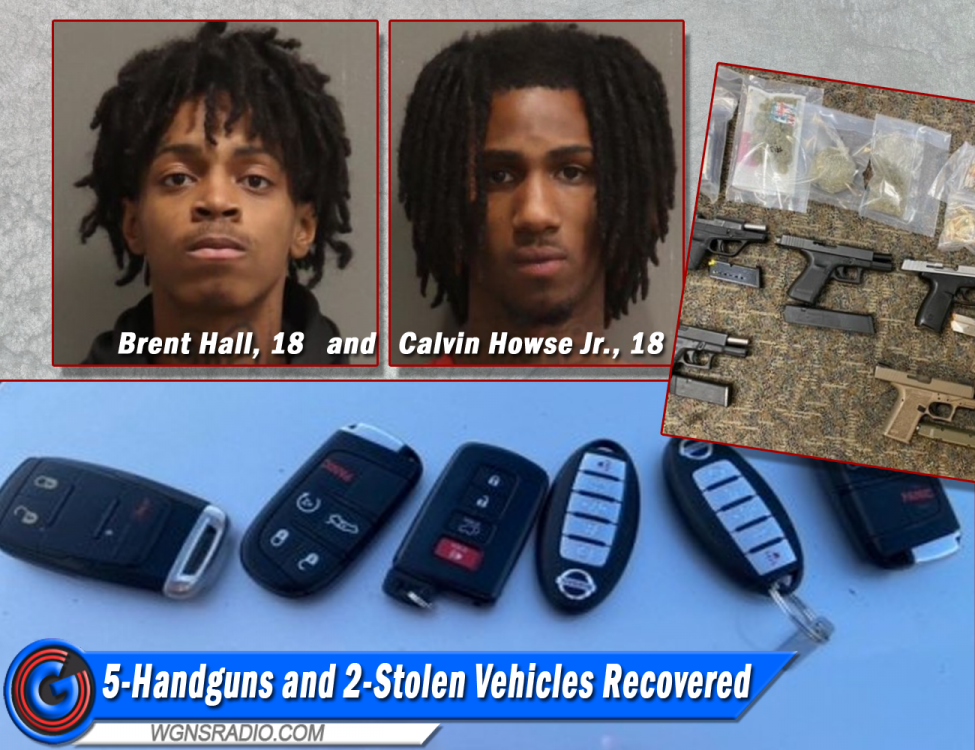 An investigation by detectives in Nashville on Monday led to four arrests and the recovery of two stolen vehicles, five handguns, six key fobs, 3.7 grams of cocaine, 60 grams of marijuana, and digital scales. At least one of the stolen guns recovered, had been reported as stolen in Murfreesboro.

Metro Detectives located a stolen 2021 Nissan Sentra in the Dellway Villa apartment complex in Nashville. When the car drove off, it was followed by a stolen 2016 Jeep Grand Cherokee. Police followed the vehicles to the Andrew Jackson public housing development and parked. Calvin Howse Jr., 18, exited from the driver’s seat of the Nissan Sentra, which had been taken with keys from a Hamilton Church Road residence on June 16. Brent Hall, 18, got out of the driver’s seat of the Jeep Grand Cherokee, which had been taken with keys from a Cahal Avenue home on June 22. A third male, age 15, was a passenger in the Sentra. All three entered an apartment in the 900 block of Blank Street. Hall was seen carrying a semiautomatic handgun with an extended magazine. Both Hall and Howse were carrying backpacks.

Recovered during the execution of a search warrant at the apartment, were five handguns (one had been stolen during a residential burglary in Nashville and a second gun had been reported stolen in Murfreesboro) and six key fobs (including the keys to the stolen Sentra and Jeep). Cocaine and a digital scale were located in Hall’s backpack. Sixty grams of marijuana, various handgun magazines, and a digital scale were located in Howse’s backpack.

Howse admitted ownership of one of the guns. He is charged with marijuana possession with intent to sell, gun possession during the commission of a felony, vehicle theft, and driving on a suspended license. He remains jailed in lieu of $80,000 bond.

Hall is charged with cocaine possession with intent to sell, weapon possession during the commission of a felony, vehicle theft, theft of a firearm, and driving on a suspended license. At the time of Hall’s arrest, he was free on $50,000 bond for aggravated robbery and two counts of aggravated assault stemming from a June 2021 shooting incident at a Brick Church Pike motel in which three persons were shot. He remains jailed on a $115,000 bond.