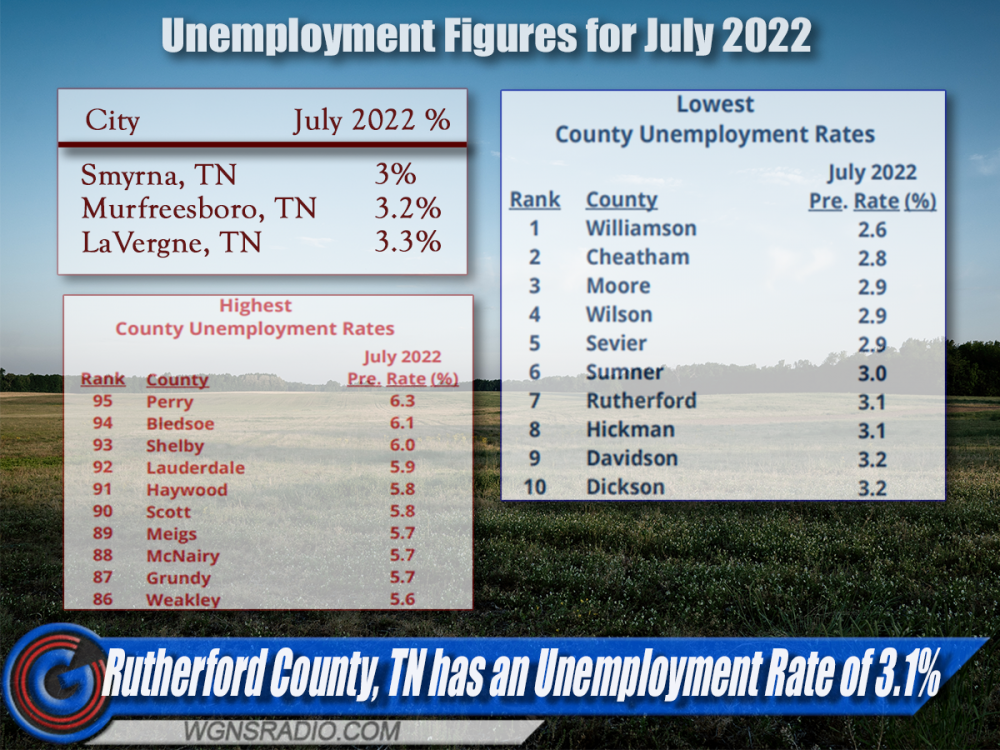 (Rutherford County, Tenn.) Nearly every county in Tennessee experienced lower unemployment in July, according to new data provided by the Department of Labor and Workforce Development (TDLWD). Eighty-nine out of the state’s 95 counties saw their jobless numbers decrease during the month.

Rutherford County, with a jobless rate of 3.1%, ranked at number 7 on the top 10 list of counties with the lowest unemployment in the state.

In Rutherford County, Smyrna once again had the lowest unemployment rate at 3%. Murfreesboro came in at 3.2 and LaVergne's jobless rate for July was at 3.3%.

Williamson County had the state’s lowest rate in July at 2.6%. The latest figure is down 0.2 of a percentage point when compared to June’s rate. Cheatham County’s rate dropped from 3.2% to 2.8% to become the state’s second lowest rate for the month of July.

Across the state, 73 counties recorded an unemployment rate lower than 5% in July. The remaining 22 counties had a rate of 5% or greater but less than 10%.

HIGHEST UNEMPLOYMENT - Perry County recorded the highest unemployment rate in the state. Its July number of 6.3% still accounted for a 0.5 of a percentage point decrease from June’s rate. Bledsoe County had the second-highest number for the month at 6.1%, which was also a 0.5 percentage point drop from the previous month.

Statewide, July’s seasonally adjusted unemployment rate came in at 3.3%. This is the third consecutive month the state’s jobless number has been 0.1 of a percentage away from the all-time low unemployment rate of 3.2%.

Nationally, seasonally adjusted unemployment dropped slightly between June and July, down 0.1 of a percentage point to 3.5%.

County unemployment rates are not adjusted to take into account seasonal impacts on employment, such as school breaks and weather events.

EMPLOYMENT AVAILABLE - Tennesseans searching for employment can start at TNWorkReady.com. The site puts all of the Department’s job seeker services in one convenient location so they can find the in-person or online assistance they need.

TDLWD has prepared a complete analysis of the July 2022 unemployment data. That report is available here.