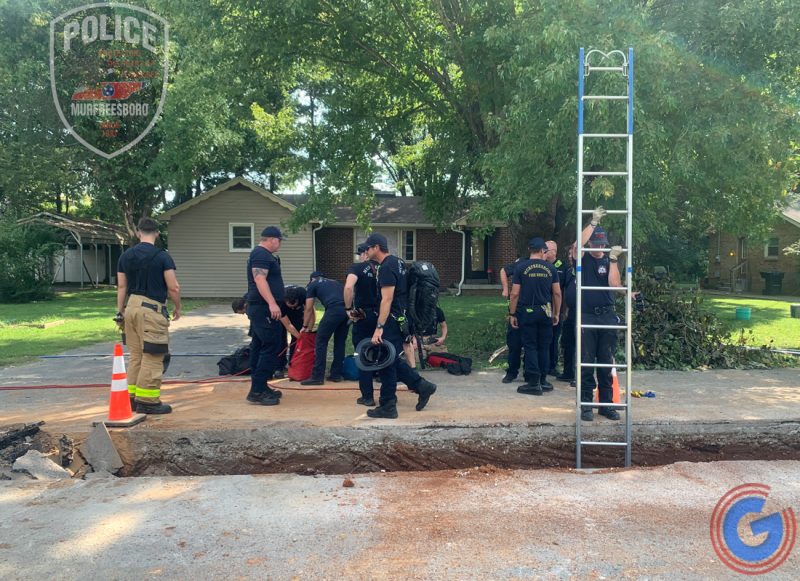 MURFREESBORO, Tenn. – Murfreesboro Fire Rescue Department (MFRD) firefighters rescued a construction worker who fell into a 10-foot-deep trench on Tuesday afternoon. Firefighters got the call around 2:15 p.m. and rushed to Johnson Street, which is where the accident occurred.

Witnesses said the construction worker was walking backwards while guiding a dump truck that was backing up when he fell into the trench. If you can imagine, a fall of 10-feet would be quite painful. To put the height of the fall into perspective, the roofline of a large box truck is typically 10-feet to 12.5-feet tall, as are many of the common construction ladders used to clean gutters. And as many know, 10-feet is the height of a professional basketball goal.

The construction company, a contractor for the Murfreesboro Water Resources Department, was working on a sewer rehabilitation project on Johnson Street, just off Dr. Martin Luther King, Jr. Blvd. (formerly Mercury Blvd), when the incident happened.

Once on the scene, fire personnel used a 16-foot ladder to climb into the trench. They placed the construction worker on a spine board to immobilize his neck and back.  Fire crews then loaded the man into a Stokes basket and walked him to the shallow end of the trench to get him out. The man was taken to the hospital for a medical evaluation where he received care following the mishap. Amazingly, he was not seriously injured and was released several hours later.

Fire personnel with Ladder 1, Ladder 4, Rescue 4 and 11, Battalion Chief 1 and 2 and Safety 1 and 2 assisted with the confined space rescue.