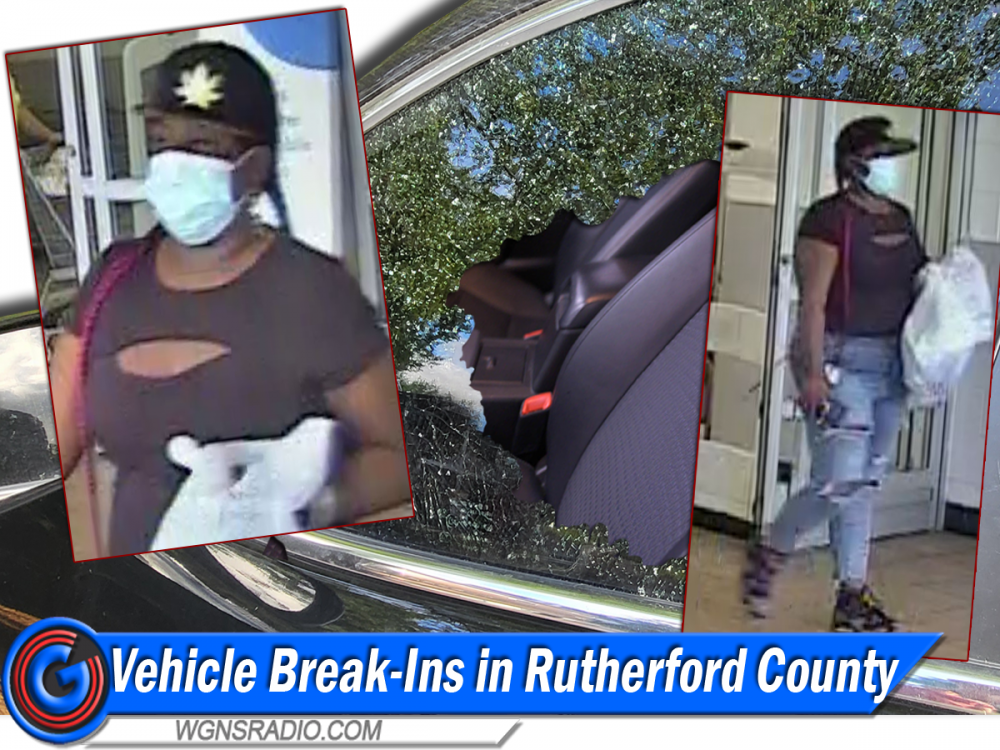 ABOVE: Photos of female suspect released by Smyrna Police Dept.

SMYRNA, TN -  In Smyrna, TN, Police continue to investigate several vehicle break-ins that have hit area residents. Evidently, authorities were able to track down a surveillance photo of one woman who police say is suspected of breaking into the cars, after she visited a Smyrna department store.

The SPD reports the possible suspect was caught on camera (photo above this story) after allegedly using a credit card that was believed to have been taken from one of the vehicles that was broken into. As a result, the woman is wanted for credit card fraud.

If you recognize the woman pictured on WGNSradio.com (Above), you are asked to contact Smyrna Police Detective Kate Armstrong at 615-267-5012 or kate.armstrong@townofsmyrna.org.

MURFREESBORO, TN - In Murfreesboro, vehicle break-ins continue to aggravate homeowners in several areas. Over the past 4-weeks, there have been a total of 48 vehicle break-ins and motor vehicle thefts. If you add-in home burglaries and garage break-ins, the number climbs to 64-reports.

Vehicle break-ins have been reported in multiple neighborhoods. Some of the targeted areas over the past 4-weeks include Bridge Avenue, Hanover Street, Lascassas Pike, North Tennessee Boulevard, the New Salem Highway, St. Andrews Drive and the area of East Main Street. Car burglaries have also been reported in commercial parking lots. Several of the areas recently hit by thieves in Murfreesboro include a motel parking lot along South Church Street, a business in the industrial area of Haley Road, the Walmart parking lot on Old Fort Parkway

As for vehicles actually being stolen, thefts have been reported in neighborhoods off of South Church Street, in the Cason Lane area near St. Andrews Drive, Fortress Boulevard and an apartment complex on Greenland Drive. Cars have also been stolen from business parking lots in the past 4-weeks. Some of the more commercial areas hit have included a parking lot along Old Fort Parkway near the Stones River Mall, a business on Memorial Boulevard, South Church Street near Broad Street and North Rutherford Boulevard near MTSU.

The majority of the vehicle break-in cases remain unsolved at this time, but police are actively trying to determine if some of the break-ins and thefts are tied to the same criminal or group of criminals.