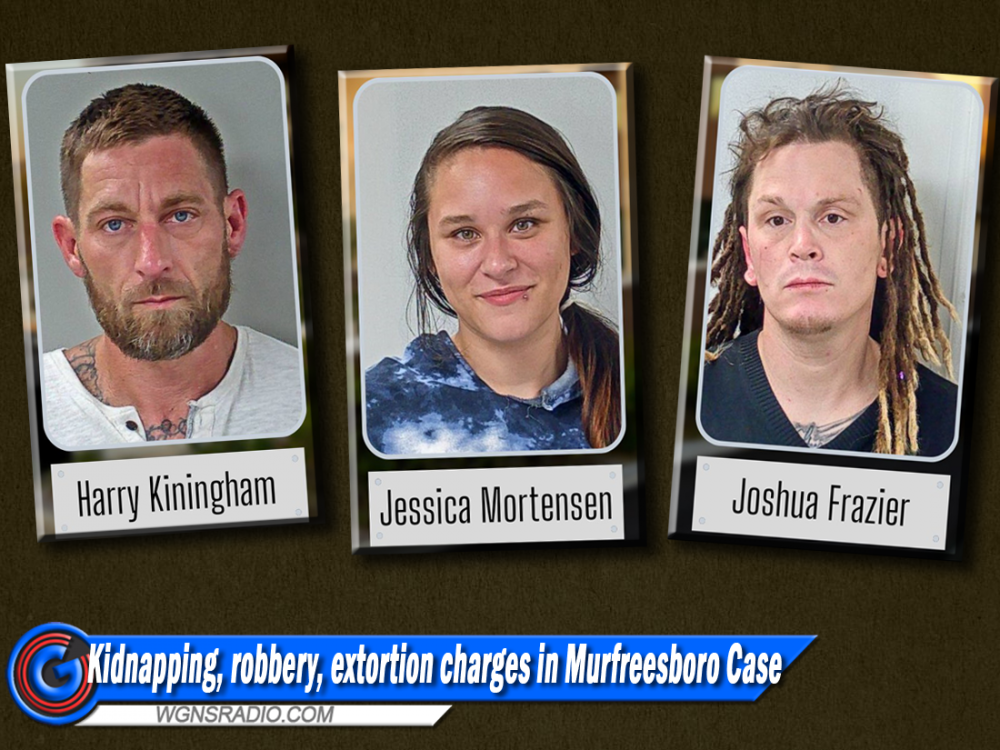 MURFREESBORO, Tenn. – Murfreesboro Police Department (MPD) officers and Tennessee Highway Patrol (THP) troopers solved an alleged kidnapping, robbery, and extortion case where a man was held hostage and reportedly tortured by two men after meeting a female for sex at a local hotel on Friday, Oct. 21st, according to the MPD.

41-Year-old Harry Kiningham was arrested at the hotel on Silohill Lane where the incident was reported to of occurred. MPD reports that officers found what is believed to be crystal methamphetamine and marijuana in Kiningham’s pocket. He is charged with aggravated kidnapping, robbery, extortion, and simple possession of drugs.

THP troopers spotted the victim’s stolen pickup truck at the same hotel around 2:22 a.m. on Sunday. The report from the MPD says that 25-Year-old Jessica Mortensen and 37-year-old Joshua Frazier attempted to run from troopers, but Frazier was detained in the parking lot. MPD officers found Mortensen in a hotel bathroom. Both are charged with aggravated kidnapping, robbery, and extortion.

The preliminary investigation shows that Mortensen contacted the 24-year-old victim from College Grove, Tennessee via Facebook Messenger. The two agreed to meet at a Murfreesboro hotel to have sex in exchange for $300 at 11:30 p.m. Friday. Once inside the hotel room, Mortensen went into the bathroom and Kiningham and Frazier approached the victim, claiming to be officers from Nashville. The suspects would allegedly force the man to remove his clothing and give his bank information. The victim said they were taken to the bank at gunpoint and forced to withdraw thousands of dollars.

After nearly 10 hours, the victim was dropped off at his home in College Grove. The victim came to MPD headquarters Saturday afternoon to file a report. His pickup was returned Sunday after Frazier and Mortensen were arrested.

Frazier, Mortensen, and Kiningham are being held on $33,500 bond at Rutherford County Adult Detention Center. Hearings are set Jan. 26 in General Sessions Court.