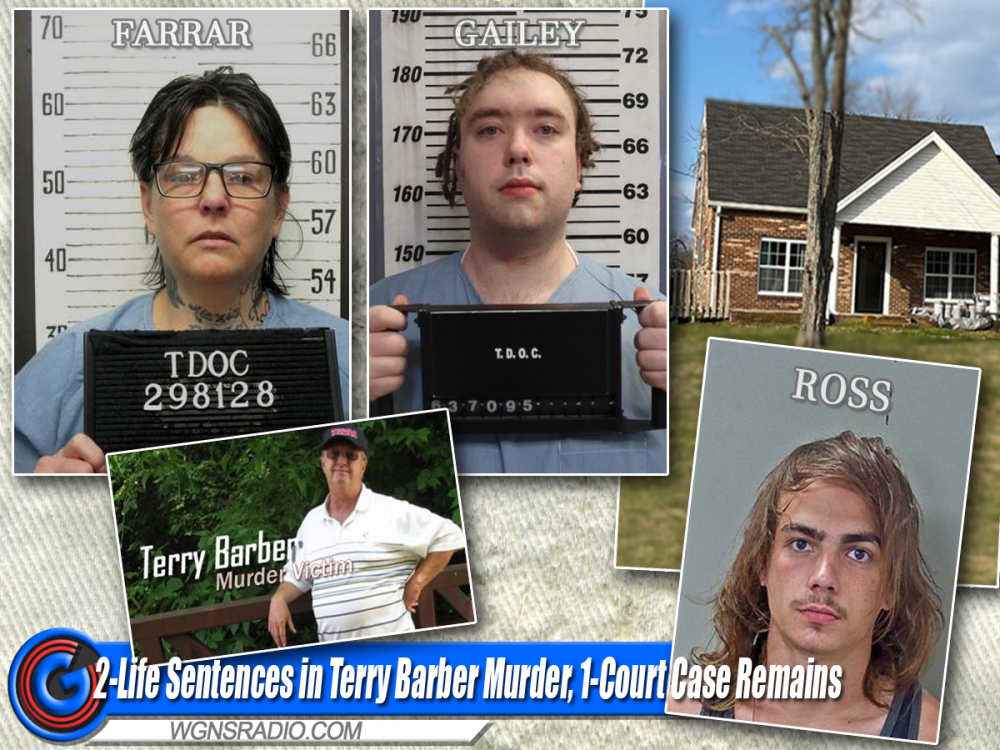 Two of three suspects in the murder of Christiana resident Terry Barber have been convicted and now sentenced to prison. On July 6th, Vernice Farrar was found guilty of first-degree murder and sentenced to life in prison. Devan Gailey entered a plea of guilty to felony murder and especially aggravated kidnapping. Gailey received a life sentence with the possibility of parole and a concurrent 25-year-sentence to serve.  42-Year-old Farrar will be eligible for release in September of 2078. At that time, she will be 98-years-old. 23-Year-old Gailey will also be eligible for release in September of 2078. If released, he will be 79-years-of-age.

Brent Ross, the remaining suspect to be heard in court, was ordered to undergo a forensic evaluation by a mental health center. On July 29th, the mental health provider corresponded with the courts. Ross is now scheduled to appear in court in January of 2023, according to Rutherford County District Attorney Jennings Jones…The attorney representing Ross is currently running for Circuit Court Judge of Rutherford County, which is where the case is being heard. If Michael Jones should win that seat on Thursday (August 4, 2022), it is not known if he will continue to represent Ross in January of next year and if so, will a Judge from a neighboring county have to step in to oversee the trial.

District Attorney Jones explains more on the murder of Terry Barber that occurred in June of 2019, which of course is what led to the convictions…68-Year-old Barber was known by area residents as the man who sold sports apparel. He was often seen a local sporting event selling SEC clothing. Barber was known around Murfreesboro for his love of youth and college sports. He was often seen driving his very distinguishable “SEC Battlefields” van at different locations. He was a spectator and fan at high school or middle school games.

Source: RCSO, Rutherford County Courts, the District Attorneys Office
DISCLAIMER: All suspects are presumed innocent until proven guilty in a court of law. The arrest records or information about an arrest that are published or reported on NewsRadio WGNS and www.WGNSradio.com are not an indication of guilt or evidence that an actual crime has been committed.

7.) Sheriff’s Office: Have you seen this SUV? And Beware of Scammers Acting Like Deputies!