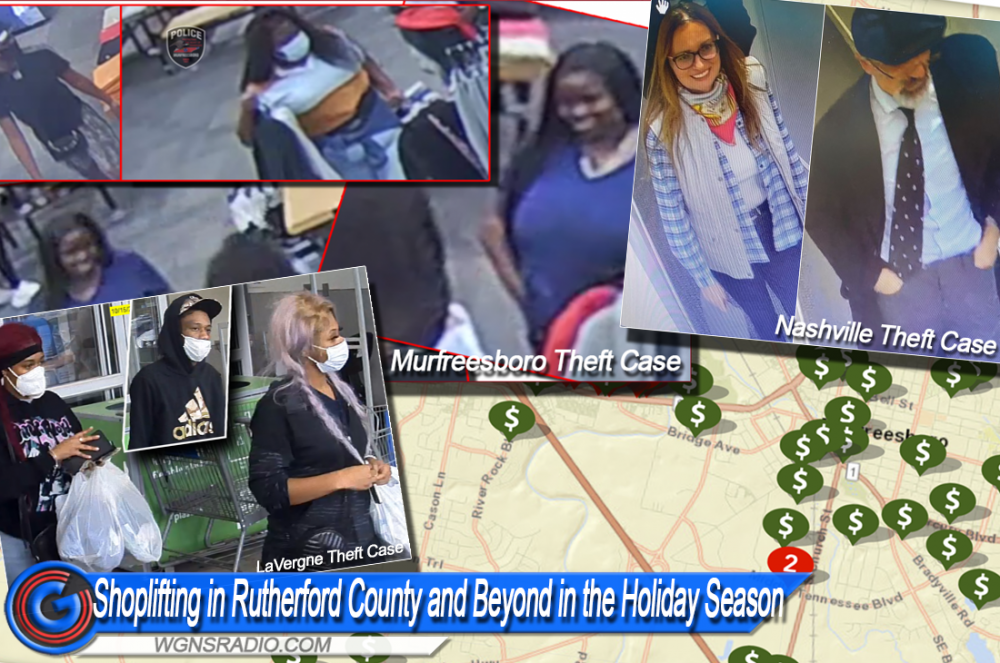 (RUTHERFORD COUNTY, TENN.) Between October 1st and November 30th, there have been more than 250 theft reports filed in the city limits of Murfreesboro. The majority of those thefts were reported in areas filled with holiday shoppers.

Along Franklin Road between I-24 and Fortress Boulevard, there were 6-theft reports filed over the past 61-days in the ‘Boro. Over that same period of time, Murfreesboro Police received 24 theft reports along Medical Center Parkway between the interstate and Thompson Lane. There were 93 theft’s along Old Fort Parkway between I-24 and the New Salem Highway since October 1st.

8-Theft reports were filed in the area of Walmart on Joe B. Jackson Parkway at South Church Street in the past 61-days and 31-thefts were reported along Rutherford Boulevard between the John Bragg Highway and Bradyville Pike.

One theft that occurred just before the start of October added up to a $9,730 loss. That theft unfolded on September 24th at the Finish Line, a sports clothing retailer in the Stones River Town Centre. Public Information Officer Larry Flowers told WGNS News, “…three unidentified persons took $9,730 worth of clothes from Finish Line inside the Stones River Town Centre. The individuals took the clothing and ran out the store without paying.” At last report, the trio have yet to be caught.

In LaVergne, a theft that involved a scam hit a Walmart store to the tune of $10,000 on October 15th. In that case police The pictured individuals were allegedly part of what police called a “Cash Cash Scam” at Walmart on October 15, 2022. In that case, the trio reportedly got away with more than $10,000 worth of merchandise and gift cards. The suspects are possibly driving a green Jeep Grand Cherokee.

In nearby Music City, Nashville detectives are working to identify two shoplifting suspects who reportedly targeted The Luxury Label consignment shop (2120 Crestmoor Road, Nashville, TN) and allegedly took nearly $30,000 worth of merchandise without paying for it. In that case, a man and a woman entered the consignment store and appeared to be browsing when they allegedly took multiple items, including a Hermes Birkin handbag, a Hublot men’s watch, and a Versace silk shirt. The duo have not been caught.

For those who can help police with information on the $9,730 theft in Murfreesboro, you are encouraged to contact Detective Pullias with the Murfreesboro Police Department at 629-201-5640.

If you know details about the theft at Walmart in LaVergne, TN, you are encouraged to contact LaVergne Detective Tanner Nokes at (615) 287-8748 or email tnokes@lavergnetn.gov.

In Nashville, if you have details on the consignment store theft, police ask that you contact Crime Stoppers at 615-742-7463.

DISCLAIMER: All suspects in the above news article are presumed innocent until proven guilty in a court of law. The arrest records or information about an arrest that are published or reported on NewsRadio WGNS and www.WGNSradio.com are not an indication of guilt or evidence that an actual crime has been committed.