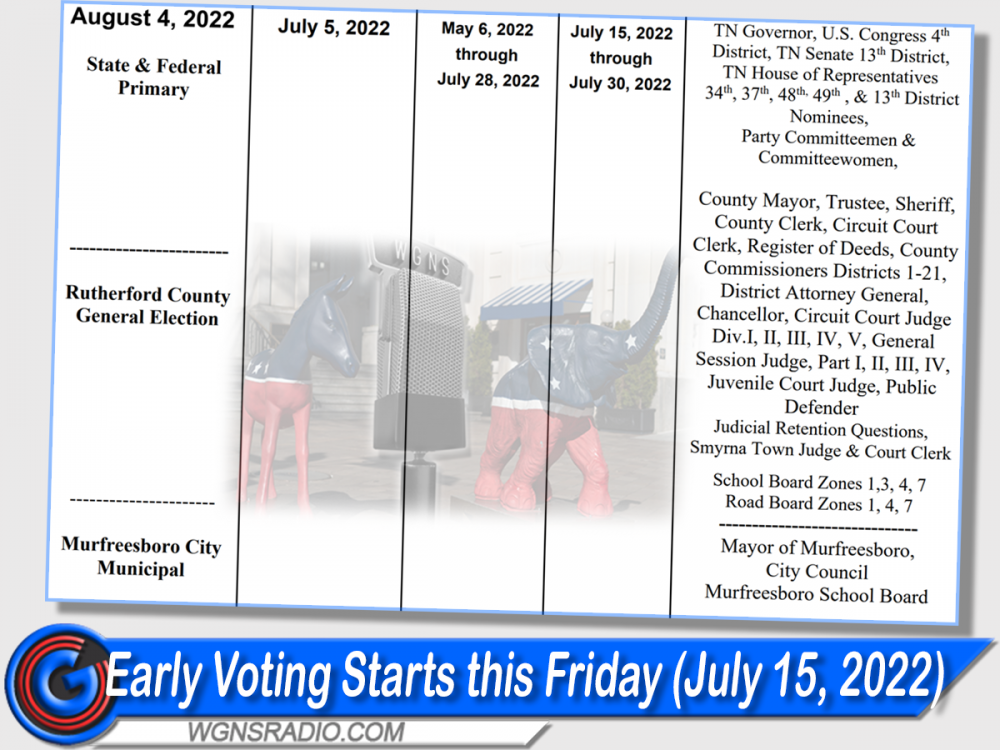 “More Tennessee voters take advantage of the convenience and flexibility of our state’s generous early voting period every year,” said Secretary of State Tre Hargett. “There is a longer ballot for the Aug. 4 election, so I encourage Tennessee voters to cast their ballot early.”

On the August ballot, Tennessee voters will see primary races for Governor, U.S. House, State Senate, State House and the State Executive Committee members for each political party and retention or general elections for judicial offices and other state and local positions.

In Rutherford County, some of the local races that are receiving attention include the Rutherford County School Board (zones 1, 3, 4 and 7), Sheriff, Juvenile Court Judge, County Mayor and the Murfreesboro City Council (You can see the full election ballot HERE).

Listen to Some of the Candidates: WGNS recently hosted several political forums that can be listened to in our podcast section. The forums we covered included the contested seats for the Rutherford County School Board, the race for Rutherford County Mayor, the position of Juvenile Court Judge and the Murfreesboro City Council race.

Voters are encouraged to review their sample ballot on the GoVoteTN app or GoVoteTN.gov before they head to the polls. Reviewing your ballot and deciding how you will vote will also reduce your time at the polls.

“There are several judicial retention questions on the ballot this year.  I want voters to be aware that the August ballot is longer than normally and will take additional time to complete," said Coordinator of Elections Mark Goins. “When you vote early, you can help reduce wait times for yourself and other voters."

Tennesseans voting early or on Election Day need to bring valid photo identification to the polls. A driver's license or photo ID issued by the Tennessee Department of Safety and Homeland Security, Tennessee state government or the federal government is acceptable even if it’s expired. Student IDs are not acceptable. Out of state driver’s license are not acceptable.  More information about what types of IDs are permitted is available on GoVoteTN.gov.

For more information about early voting, visit GoVoteTN.gov or call the Division of Elections toll-free at 1-877-850-4959.

Other News Headlines from WGNS RADIO:
1.) Serious Auto Accident in Murfreesboro
2.) Two injured in Monday shooting on I-840 in Rutherford County, TN
3.) TBI Charges Firefighter in Waverly, TN with Arson
4.) Housing Protest in nearby Nashville, TN
5.) The price of Gas this week in Rutherford County, TN
6.) Research: Tennessee Residents Earn the 10th Least Alternative Income
7.) The Taste of Rutherford event will feature lots of food and local beer