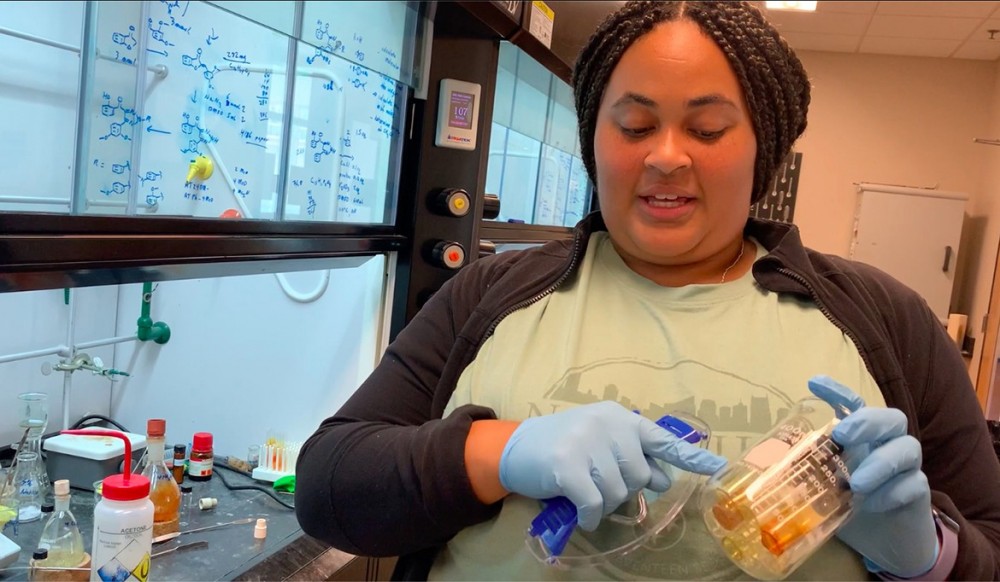 PHOTO Above: Shown recently in an MTSU Science Building chemistry lab, Hannah Michael of Hampton, New Hampshire, a junior at St. Joseph’s College in Standish, Maine, said the NSF REU experience has “allowed me to have opportunities I might not have at my school.” The students received pointers for resumes and more and were mentored by MTSU faculty during their NSF undergraduate research experience that ended July 29. (MTSU photo by Randy Weiler)

The university’s science departments — chemistry and engineering technology with one group and mathematics, computer science and physics with a second — hosted students from colleges across the U.S. for research, collaboration, field trips and more. Students are chosen after a rigorous application process.

“It was a lot of work. The hardest part was getting the codes to work because there weren’t any good implementations of what we’re using right now,” Givens said of her complex computational science study. “We took one (implementation) and had to modify it a lot. I only had two weeks to work on training the model, so it was definitely difficult.”

One of 60 such programs in the country this summer, the research includes characterization using methods involving X-rays, said Andrienne Friedli, Chemistry Department interim chair and mentor. It is the second year of a three-year grant.

“The major technique is X-ray crystallography, where X-rays diffract off atoms in molecules, giving rise to patterns that identify the spatial relationships of the atoms in molecules and their proximity in solids,” Friedli added.

Hannah Michael, 20, of Hampton, New Hampshire, a junior at St. Joseph’s College in Standish, Maine, said the experience has “allowed me to have opportunities I might not have at my school and, overall, it taught me how to write a resume, how to do research, how to apply to grad school if I want to and opening my eyes to more research I could do.”

One highlight was a field trip to the Oak Ridge National Laboratory.

In the COMS REU, students learn a blend of computational approaches from the fields of computer science and mathematics with a focus on solving problems in the applied sciences (in particular, biology and physics), said Wandi Ding, professor in the Mathematical Sciences Department. It marks the fourth year of a five-year grant.

“Students develop skills in computer programming, high-performance computing, mathematical modeling and machine learning during the first half of the program,” Ding said. “They develop practical research skills including experiment/simulation, design/testing and data generation/presentation by working closely with program faculty on applied research projects from scientific domains in the second half.”

Sawyer Griffy, 20, of Clarksville, Tennessee, a senior at the University of Alabama, said his team studied modeling ticks with Rocky Mountain Spotted Fever. Math mentor Rachel Leander connected them with a University of Kansas researcher, who often provided insight and data.

“We wanted to see the infection travel through in increasing and decreasing numbers and looking at ways to control the population with prescribed burns (fire),” Griffy said.

MTSU grows on some participants

A 2021 NSF REU participant, Nirvana Almada of San Diego, California, enjoyed the experience so much she moved to Murfreesboro to attend graduate school at MTSU. She assisted this year’s chemistry group.

The Science Building labs and faculty have impressed Kuszynski , who is from Livonia, Michigan, such that she “really hopes to come back (to MTSU) for my Ph.D.,” she said.

3.) NEW Goodness Gracious Restaurant Opens at the Fountains at Gateway